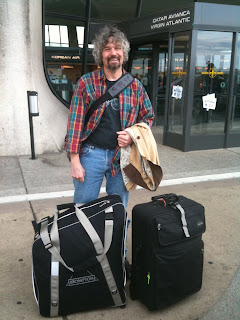 I took Tim and his Brompton to Dulles for his 6:30 flight on Virgin Atlantic. Why did he fly on Virgin Atlantic? They don't charge for checking a bicycle and that is a big deal these days in the world of traveling with a bike.

He will get into Heathrow early in the morning and make his way to the train station. He'll use the train for his trip to Inspired Cycle Engineering. He'll spend Wednesday and part of Thursday at ICE/Trice and then return to London.

He'll be sharing information from his iPhone. He'll be looking for wifi opportunities because the cost of data transfer in England is pricey. Without a prepurchased plan the cost of a one meg data transfer (about the download of this page) is said to cost $20 ($.02 per kilobyte). Tim has 50 megabytes prepurchased and then additional megabytes will cost $5. So we'll find out how he can report on his progress.

The news is ......... he's off.  Please note that Tim's Brompton in the bag (left) is about the same size as his suitcase.  Also note the Twitter information at the top left of this page that Tim has send.
Posted by John Brunow at 6:02 PM No comments:

Not quite the same as it ever was

This morning's Washington Post carries a review of a new book by David Byrne called "Bicycle Diaries". The Post says this is no travel diary, but muses by Byrne on a wide range of subjects.  It sounds like a book reflecting the old Albert Einstein quote of "I thought of that while riding my bicycle".  It is the feeling of freedom that stimulates the mind, I think.

According to the review Byrne has "taken on bicycle promotion as a pet project".  Wonderful.  We need all the help we can get.

"Bicycles Diaries" by David Byrne is published by Viking and sells for $25.95.  I would hope there is a Kindle edition.
Posted by John Brunow at 9:18 AM No comments: 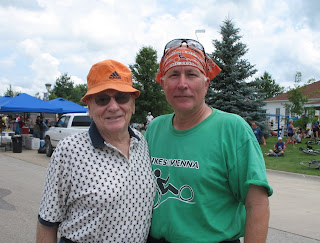 This evening I checked my email and let out a hoot when I got a message from Facebook telling me that my father had asked me to be his friend.  So I confirmed that I was in fact friends with Philsy.

Now I didn't call my father to ask him about his venturing into the Facebook world because the Iowa - Penn State game was starting.  Phone conversations during Iowa games are best avoided although in the past I have called home and asked to have the phone set near the television so I could listen to the end of a game.

I called Ces who went to Seattle today to report this expansion of my Facebook friends and then I called youngest daughter Sara and giggled at the prospect of her Facebook activity being influenced by having both her parents and her grandparents seeing her Facebook posts.  Then I called Tim to share the smile and both of us got laughing when he told me that his 82 year old mother had friended him on Facebook two days ago.

Life is interesting.  A social network that began with university aged participants has expanded to 87 year old dads and 82 year old moms reaching out to their sons.

So I found this photo from RAGBRAI this summer when my folks met us at Moravia for lunch.  I posted it on Facebook with the message;

"Let's see for all the times I snagged you with fish hooks, allowed the ladder to fold up and drop you to the ground, backed out of the driveway and left you in mid project, got the Chevelle beaten by hail and let's not forget the couple of times I peppered you with buckshot....... sure Dad, I'll be your friend on Facebook. It will make me proud. And while I'm at it, Happy 87th Birthday coming up next Friday. I'm going to get your present mailed."

I hope it makes him laugh when he sees it on Facebook.  Although last summer I asked him if he'd forgiven me for the 1968 damage to the Chevelle and he said "not yet".
Posted by John Brunow at 8:47 PM No comments:

Originally uploaded by bikes@vienna
Allow me to introduce you to Jen and Adam Ward. They were married last Sunday on the beach at Oak Island, NC.

Long time bikes@vienna customers will remember Adam's years in the store and his skill as a mechanic. Although Adam has moved on to use his formal education for Spot Image, bicycles still are an important part of his life. In fact so significant that Jen noted his joy of cycling in her wedding vow.

The Wards live in Fairfax. Adam generously comes in to help in the store when I get in trouble.
Posted by John Brunow at 1:22 PM No comments: 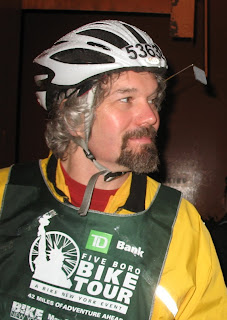 Tim Fricker is packing his bags and his Brompton for a trip to England, his first. Tim will be competing in the Brompton World Championships at Blenheim Palace on Sunday, October 4th. The day is dedicated to a day of British cycling and the details of the overall event can be viewed at http://www.bikeblenheimpalace.com

The details of the Brompton World Championship can be viewed at http://www.brompton.co.uk/bwc/2009/ . If you have a bit more time there is a delightful bit of video from the 2008 event which can be viewed at http://www.brompton.co.uk/video/bwc08.asp Now don't laugh too loud when you watch the Le Man style start of the race and when you see the participants in suitcoat, dress shirt, tie, and shorts with wild colors and patterns. This is a wacky, fun event which get Brompton folders in front of a larger audience. It should be a fun filled occasion.

You may have noticed the new Twitter box in the top left of this blog. We are planning to use Twitter for Tim to report on his activities. He'll be sending Tweets and Twitter Pix to let us know the details of his adventure.
Posted by John Brunow at 11:52 PM No comments:

Adam Ward is a terrific bike mechanic and for over six years I was fortunate to have him working at bikes@vienna. He is a kind person and he comes in when we need help to get through me being off riding across Iowa or some other scheduling issue.

This Sunday Adam will be married to his love, Jenny on a beach on Oak Island, NC. Ces and I will be there to celebrate the event.

So many people like Adam and ask about what he is doing that I thought an update was appropriate. The newly weds will live in Fairfax.
Posted by John Brunow at 11:14 PM No comments: