Mira Holloway arrived on Wednesday, September 28th. She is the daughter of our eldest child, Jessica, and her husband Drew. Mira weighed 7 lbs and 4 oz. She has reddish brown hair and her parents report that she is in good health.

We are packing our bags and going to Seattle Sunday evening to meet Mira. You can understand the excitement that this new family member brings to us. I hope you will not be inconvenienced by the store being closed for the three days.

Yes, there will soon be photos around the store. Life is good.
Posted by John Brunow at 10:14 AM No comments: 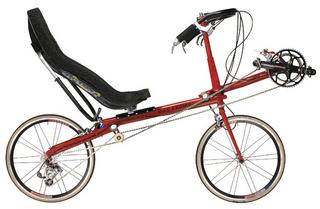 Here's the latest from Bike Friday:

The new Bike Friday Recumbent, dubbed Next Sat R Day, is finally out of the bag!

Nearly every day for the last year customers and others have called asking "when can I order one?" Finally after many challenges (we have been so busy that finding time to design a new bike was like squeezing grape juice out of a turnip) we are ready to say "you can order one now".

Hanz's goal with this bike was to make it lighter, faster, easier to fold and pack as well as have more tire choices. There are 2 models - touring and sport. 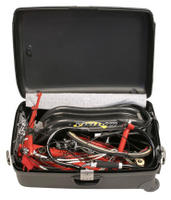 Special features of the Touring model (for people who want comfort touring).

The bike is so new that there is almost no information on the Bike Friday Web site. Once we have more info we'll pass it on.
Posted by Bruce Wright at 9:31 PM No comments:

I'm anxiously awaiting news of the new Bike Friday folding recumbent said to be nearing production (as mentioned below in the Aug. 25 entry). In the meantime, I'll have to settle for trips with my New World Tourist. It's an older bike, that was purchased in 1997. It still rides well, and I'm always impressed with the ride each time I ride it on a longer trip. Between trips it doesn't get much use, but I've paid for it at least once by not having to pay the airline's bicycle surcharge.

Last week I used it on a trip to Vermont to visit my mother. I was able to complete the entire trip using the bike and Amtrak. I left the house early on Tuesday morning hauling the suitcase/trailer behind me. It contained my luggage, a soft canvas bag. The Vermonter leaves Union Station at 8:05. It takes about 20 minutes to properly pack the Friday, which meant that I should plan on arriving at around 7:15. The trip from home to the station by bike with the trailer takes me about 2 hours. To leave a little time to allow for problems along the way, I planned to leave at 5am.

It's dark at 5am and I hadn't installed my lights on the Friday. By the time I had the lights in place (NiteRider Trail Rat and Cateye rear light) it was already 5:20 am. I made it to the station a little after 7 and proceeded to pack the bike, rack, and trailer frame. I have to take the wheels in a separate bag inside my luggage. I changed into my traveling clothes and had plenty of time to catch the train.

The trip to White River Junction takes about 11 hours, a little longer than by car, but the trip is so much more pleasant. It gives one a chance to get caught up on reading and to watch the world go by. At White River Junction I reversed the process, unpacking the bike, assembling the trailer frame, and riding off. The trip to the cabin where my mother stays takes about 3 hours, which meant another dark ride. I have plenty of reflective gear and a neon lime green shirt that I purchased from Alert Shirts for a very reasonable $10 each.

The stars were incredibly bright, a factor of the clean air and lack of night lights. Vermonters tend not to venture out much after dark, so the ride was very pleasant with very little traffic. The only downside were the few cars who insisted on using their bright lights, nearly blinding me as they passed. I made it to the cabin a little after 10 pm, tired and ready for bed.

View some photos from that trip.
Posted by Bruce Wright at 10:01 AM No comments: