Get ready for the shorter daylight hours!

We're running a special on dynamo wheels and lights! Get a Shimano NX-20 hub, Alex rim (26" or 700C), DT stainless steel spokes, and a Busch & Muller DLumotec Oval N Plus lamp, all for $160! Ordinarily this setup would cost over $200, so get them while they're here!

We also have a variety of battery powered lighting systems, both rechargeable and non-rechargeable, as well as higher-end dynamo hub options. So come on by!
Posted by Tim at 4:15 PM No comments:

Join Us in the Vienna Halloween Parade

We will be riding in the Halloween Parade for the 13th time.  You are invited to ride with us on Wednesday, October 27.

The Vienna Halloween Parade begins at 7 PM.  We are parade entry 84 so we will not step off until  between 8 PM and 8:30 PM.  Our escort vehicle will be in place at 6 PM.  Our plan is to leave the store between 7:15 and 7:30 to travel the back streets to reach our parade position.  The challenge is how to get anywhere in the downtown area after 6 PM.  We would suggest that you park away from the downtown and ride to the store.

Following the parade we'll return to the store for Walking Tacos,  Pumpkin Ale, and good conversation about cycling.  To participate you must wear a helmet.  You should have lights for your bike ot trike (the more lights the better).   Our position on Branch Road for the organization of the parade is dark so lights are important.   A costume is a nice touch, but not necessary.

We are involved in two efforts this parade.  John is trying to connect delta trikes in an attempt to hook together 25.  Tim is putting together a Brompton Brigade which will ride, fold, walk, unfold, and ride again.

Send us an email to John@bikesatvienna.com if you plan to participate.
Posted by John Brunow at 2:58 PM No comments: 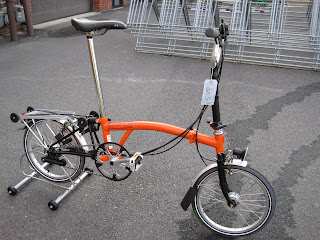 Well, John has been working at getting a band of folks out on a Trike Train for the Vienna Halloween Parade, so I figure it's time to launch a campaign of my own...

Calling all Brompton owners! Let's form a Brompton Brigade for Halloween! Two years ago, I was a solitary Bromptoneer, riding and folding my bike along ...the route. This year, let's see how many we can get! Mark your calendars for October 27th and come prepared to ride n' fold!

That's me, two years ago, riding along, then folding and unfolding the bike. Make sure you practice this in the dark, folks!
Posted by Tim at 3:50 PM No comments:

If you follow this blog you know bikes@vienna is not sale driven.  It is once in a while that we have a special item or try to attract your interest with some type of discount.  The planets checked into place on Tuesday for us to have one of our most popular recumbent trikes on sale this weekend. 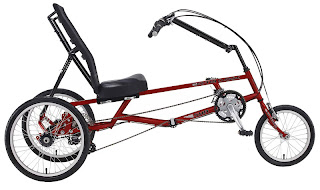 We will have four red EZ-3 Classic trikes offered for $800.  You can find more details by clicking on Sun EX-3 Classic  This trike at this price provides you with a new product with a warranty and our Continuing Care for the price that we have received for used EZ-3 or X-3 models.  We have the connectors in stock so that you could create a trike tandem.  Oh, the possibilities!  Remember we have four, red EZ-3s at this price.

We are open 10-6 Thursday through Monday.  Yes, we are open on Columbus Day.
Posted by John Brunow at 7:39 AM No comments:

More from the Brompton World Championship!

From Charmaine, our "customer in the field"... here she recounts the events of Saturday, October 2nd, the day before the actual race:

I got to the meet-up point pretty early for the Brompton 100 ride - I definitely didn't want to miss it. :) I took the Tube to a station not far from where I needed to meet up with 99 other Brompton bikers for a 10-mile ride from central London to the Brompton bike factory, for the awards ceremony. A number of the riders were "dressed up" in funny or business attire, and they were neat to see. :) As we gathered, the Changing of the Guards (horses) came down the street, so we got some pictures of that. :) We then got on the road and rode along safely, regrouping as needed and "bunching up" at lights to get as many of us through the lights as we could. The route was pretty convoluted - lots of turns, but everyone stuck together. We rode past Buckingham Palace and then past pretty city homes and areas. We rode through the Brompton Cemetary, which was pretty and peaceful (though in spots very weeded and overgrown). Then through the suburbs and along the Thames River and finally got to the Brompton factory, where they were being presented the "Queen's Award" for Enterprise in both Innovation and International Trade categories. This is the second Queen's Award they have received. Evidently only 16 other companies in the UK have received this award - so it is a big thing! A lieutenant who was dressed in his military uniform, presented the award. Andrew Ritchie was present as the Managing Director of Brompton, Will Butler-Adams graciously and humbly received the award. :)

We had a tasty lunch while a good jazz band played. Then we were given a tour of the Brompton factory, which was neat and made me appreciate all the parts to the bicycle (all of which are handmade and assembled). Only the painting of the bikes is outsourced.
So it was a fun afternoon and I'm glad I had the opportunity to attend! :)

Charmaine
Posted by Tim at 11:50 AM No comments: 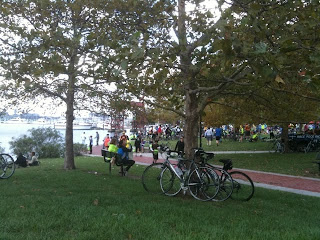 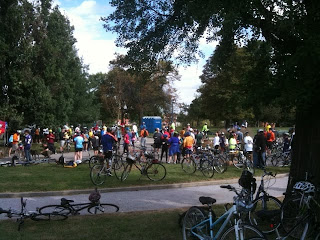 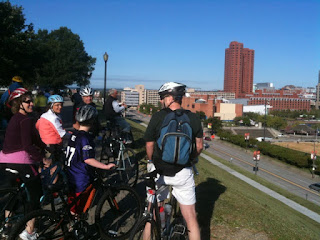 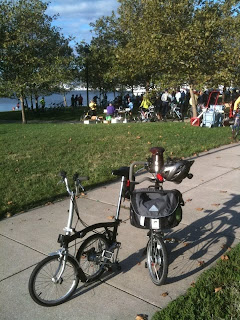 At the registration area, Tim and Christy are ready to ride!
Posted by Tim at 8:39 AM No comments: 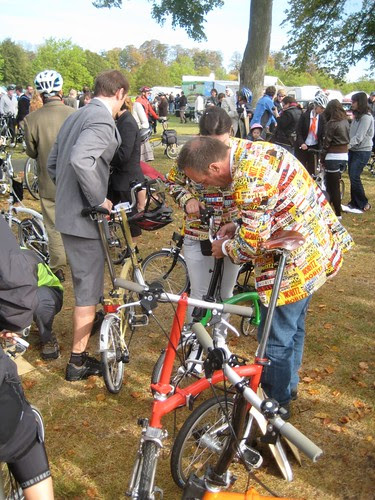 And sadly, Tim isn't able to go this year. Instead, he'll be riding in Baltimore's Tour du Port, spreading the word about bikes@vienna, folding bikes, and Bromptons.

However, Charmaine Ruppolt, a customer and new Brompton owner, WILL be riding tomorrow, Sunday, October 3rd, at Blenheim Palace, with 749 other Bromptoneers! So please join us in wishing her a great ride (and perhaps a higher placing than mine of last year).

Today she's participating in a factory tour, a scenic ride in London, and witnessing an award ceremony where Brompton is being presented with the Queen's Award for Enterprise in both the Innovation and International Trade categories. Apparently there's a reception with food and jazz as well. Sounds like a really great time.

Watch this space for news of Charmaine's experiences, probably on her return to the US. We'll keep you posted! 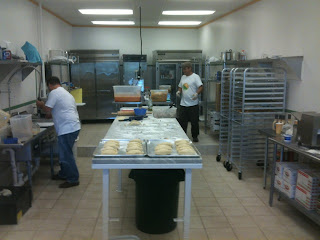 The cars are driving up the alley and slowing to see if there is much activity at Pure Pasty. Here, you can see inside without making the trip.

Pure Pasty has opened and we hope they do very well.

Posted by John Brunow at 1:06 PM No comments: