Ah Ha, Oh No, Don't Let the Rain Come Down

Bike To Work Day brought back lots of those old songs that relate to rain, floods, and the strength of the human spirit. At the Vienna Pit Stop we had a steady flow of both riders and rain. People had a wonderful attitude and most had smiles. It again re-affirmed what I admire in the character of people who ride bicycles.

Our registration at the Vienna Pit Stop was at 263 which is a new "high water" mark. If you were not able to stop at the Pit Stop we have extra t-shirts, water bottles, and drawing items. If you were registered at the Vienna Pit Stop, please come passed bikes@vienna and we'll provide you with the t-shirt and water bottle while they last. I would ask that you stop by during the week because our weekends are wild and crazy enough.

I want to express my personal thanks to Ann and Peggy at Whole Foods for their participation in Bike To Work Day. The support that they give this event is wonderful.
Posted by John Brunow at 7:00 AM No comments:

A clean chain is a happy chain

I've recently discovered the benefits of using a wax-based chain lube. In the past I've always used a conventional oil lube like Phil Tenacious Oil or a synthetic lube like Pedro's SynLube. They worked well and when I would consistently wipe the chain with an oily rag and re-lube, the chain stayed relatively clean. When I didn't spend the time to keep it clean, it became a black, oily mess. Anything that touched the chain would likewise become a black, oily mess.

We mostly use White Lightning at the shop. In the past when I've used it, I would see large chunks of a black, waxy substance on the chain, derailleur pulleys, cassette, and chainrings. This didn't seem like much of an improvement over the oil, so I stopped using it.

What I didn't realize, is that when one changes from an oil-based lube to the wax-based lube, there is an initial cleaning process that occurs. All the grit and dirt that is embedded in the chain works it's way to the surface and adheres to the wax, even with a “clean” chain. This dirt/wax mix must be cleaned off and the White Lightning re-applied. After a few applications, the chain becomes purged of most of this embedded grit and only periodic applications of White Lightning are needed.

I decided to make the switch a while back and after this initial cleaning period, my chain has remained surprisingly clean. I apply the White Lightning regularly, more frequently than the oil-based lubes of the past. It probably costs more, but the cost is minor compared to the benefits of having a clean drivechain. And a clean chain is a happy chain. It works more efficiently, and there is less buildup of gunk on the derailleur pulleys, cassette, and chainrings, a common cause of shifting problems.
Posted by Bruce Wright at 9:24 AM No comments: 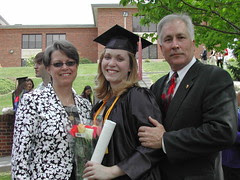 Last Saturday, Sara graduated from Shenandoah University. You may know her as the young woman at the front counter of bikes@vienna. You may know her as an actress. She is our youngest and we are proud of her and her graduation with honors. She's going to work at bikes@vienna for a couple of weeks and then go to Richmond to work for the summer. She auditioned earlier this week in New York. She's looking for opportunities in the world of musical theater.

Six years ago Sara participated in the "Powder Puff" football game during James Madison High School's Homecoming events. The young women personalized their football jerseys with nicknames. Sara had "Mad Diva" printed on the back of her jersey because of her participation in the drama department at Madison. So I started calling her Diva.

This clear, beautiful day was the Diva's Day. Once again she made her mother and I very proud.

Posted by John Brunow at 8:05 PM No comments:

Okay, let's get this over with now.

I took bikes out to Kinkos at Tyson's to ship them Fedex this afternoon. I finished that task and looked at the Route 7 parking lot and pondered what other errands I should run in that strip mall. I thought of a customer's comment about me getting tanned along with Ces' concern about me wearing sunscreen. Bruce had also made the point that I'm out in the sun a good part of the day. So I walked to Ranger Surplus to see if they had any straw hats. A ball cap doesn't do much for the ears and back of the neck.

Ranger Surplus had a number of choices. I looked silly in virtually all of them. There were pith helmets which brought a smile because growing up our neighbor Dewey Bear had worn a pith helmet as he worked in the yard (well I never went in his house so I suppose he took it off in the house). Years after Dewey passed to his reward I bought my dad a pith helmet and he still wears it (or a successor) during his outdoor projects. Sooooooooo, I tried on a pith helmet. It looked silly, but no worse than the other straw hats.

I took the pith helmet to the cash register. The young man looked at the pith helmet and asked, "Planning on bagging some big game this evening sir?" To which I replied, "No, just battling a family history of skin cancer". He nodded and took my money.

Okay, I know I look silly. There will probably be some funny "big game" jokes. Bring your best one and come see us. I laugh better as someone is buying a bike.
Posted by John Brunow at 6:36 PM No comments:

Warm weather has escalated our traffic. It was not unusual to have two men visit the store looking for a scooter for a daughter. What was unusual was the way that they moved around the store and kept trying to get us away from the front counter. They left and I turned to Bruce to share the thought that they'd been "checking us out". Within ten minutes one of our customers, who is a Vienna police officer, brought in a bike for repair. I recounted the story to him and he jotted down information. He was on his way to work.

In a very short time we learned that another Vienna business had been robbed. The description of the robbers was the same as the one we'd given for our visitors. The police dispatcher called to ask if we have video in the store. No, but one of the visitors had ridden a bike. So the bike was fingerprinted. I'll let you know how this story ends.
Posted by John Brunow at 9:32 AM No comments:

Big Cat HPV announced yesterday that they will increase their prices on the Pocket, Road, and Speed as of June 1. The revision of their pricing is the result of escalating costs for the aluminum stock used for their trikes. The new prices will be:

bikes@vienna has two Speeds in the store. The price on these trikes is $2350 until June 1. We have two Roads on order and the price of those bikes will depend on the date of their delivery.
Posted by John Brunow at 9:14 AM No comments: 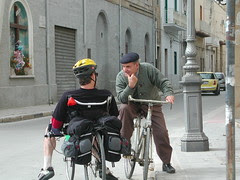 Bill Perlman and Pat Shooltz recently returned from an adventure in Sicily. Bill brought me a CD of photos and this photo captured my attention. It is a mix of the contrasts in the photo which endears it to me. Bill is shown on his recumbent consulting with a local cyclist on a conventional bike. The photo is shades of gray and earthtones except Bill's helmet and some red on this shirt and bike.

Pat, you took an award winner in my opinion.

Posted by John Brunow at 1:26 PM No comments:

bikes@vienna will be participating in Thule Days. We have trunk mount and hitch mount racks on sale with substantial savings (-20%). We also have some Thule stock from last year at even better savings. We do not have any roof mount kits as part of the sale.

In preparation for taking advantage of the sale you might like to go to www.thuleracks.com. Thule has a good interactive site that will let you know which of their products will work with your vehicle. You just let the software know the make, model, and year of your vehicle. You'll then get to express your preference for the roof, hitch, or trunk mount rack. From this exercise you'll know what models interest you.

At bikes@vienna we help you install the rack and explain how to effectively use the rack.
Posted by John Brunow at 5:10 PM No comments: