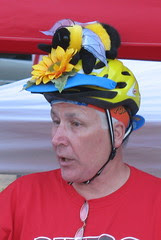 Me&Bee
Originally uploaded by bikes@vienna
For Viva! Vienna! Ces decorated a helmet using a bee stuffed toy and a fake sunflower. I wore the helmet in the bikes@vienna booth on Church Street to hand out flyers about our ViVa! Helmets contest. We had some delightful entries and the winner will be named tomorrow. I misplaced the down load cable from the digital camera until today so the process is taking longer than I anticipated.

I became a backyard beekeeper this spring after taking an eight week course sponsored by the Beekeeper Association of Northern Virginia (BANV). I now have two hives in the back yard and I am enjoying the experience very much. I would recommend the hobby to you. I have learned so much about bees.
Posted by John Brunow at 3:58 PM No comments:

You'd feel better on a bike

Well actually it's a trike, or rather three of them. An 86 year old mother and her 55 year old daughter have mostly stopped using their car and they now get around Carlsbad, California on their two single trikes and their trike tandem. Watch them in action. Hat tip to Adventure Cycling Bike Bits e-newsletter.
Posted by Bruce Wright at 9:52 PM No comments:

Bike To Work Day 2008 was wet and given that fact it still was a success in my view. The downpour of rain during the earliest morning hours made me wonder if anyone would ride on Friday morning. At 5:30 on my way to the store and then to Whole Foods I noted the drizzle. But those determined cyclists started arriving at the Vienna Pit Stop a bit after 6:00 AM. During the next two and one half hours the stream of riders was steady and the water tailed off.

It was a good morning. Upbeat people riding bikes are inspiring. There were lots of volunteers helping with the distribution of t-shirts, the new Fairfax County bike maps, and W&OD water bottles. My thanks to Jeff, Larry, Jo, Marty, Anne, Tim, and Jeff.

Keren and the Whole Foods group kept the snacks, juice, water, and good strong coffee coming. Thank you so much Keren et al!

Keith Oberg was there from Bike For The World. We had a VDOT representative, a Tour de Cure representative, Barbara from PPTC, and Hunter from Fairfax Advocates for Better Bicycling. Once again Fairfax County Supervisor Linda Smyth joined us and listened to cyclist talk about what they believe needs to be done to improve cycling conditions in the county. Thank you to all of those people for joining in.

Fox 5 News chose the Vienna Pit Stop for their news coverage of Bike To Work Day. It added excitement to the morning as they did interviews and on the spot reports. A thank you to Fox 5 for giving the event coverage.

Over 6,000 riders registered for Bike To Work Day. Their motivation to ride is varied, but I always marvel at the emphasis that gets placed on the Bike To Work Day t-shirt. Thursday evening as I printed out the list of those registered for the Vienna Pit Stop I received a call at the store. It was a cyclist who wanted to know if he could get his t-shirt even though he would not be in town for the event. He was calling from Venezuela! He'd been there for business and his flight back to Washington had been cancelled so he would not get back in time for Bike To Work Day. A regular bike commuter, he had a collection of BTWD t-shirts and he did not want to break the string. I like it.

What ever the reason........$3.96 a gallon fuel, endorphins, or a Bike To Work t-shirt; I hope you can find a way to ride your bike to work, to school, to the store, or around the block because it is good for you.
Posted by John Brunow at 7:32 AM No comments:

We had 31 additional Dahons arrive last Thursday and Friday. We now have Ciaos, Glide P8, Mu 24, Mariner, and Vittesse models added to what we have in the store. I probably did not order enough Glide P8s. Two sold immediately because of the great ride and terrific looks. The saddle and grips with a leather look and the deep root beer color of the frame make quite an impression.

Folding bikes continue to sell briskly. This would be a good year to purchase your folder. I am already hearing conversations about big increases in folding bike costs in 2009. Come test ride a folder.
Posted by John Brunow at 7:23 AM No comments:

Do you sell tandems?

What tandems do we have in the store?

Do we have road or mountain style tandems, nope.
Posted by John Brunow at 1:34 PM No comments:

Today I have a broad range of Hase products in the store. Hase manufactures very nice trikes, tandems, singles, and a kid's trailing device that will turn into a sporty trike.

On this date I have:

I sold the Tangun on Friday. I have ordered a replacement.

I have these high quality German bikes and trikes for you to test and purchase.
Posted by John Brunow at 10:23 AM No comments:

Do you have Dahons in the store?

We get lots of phone calls. I kid that it is because a human answers the phone here most of the time.

A reoccurring call involves whether we have certain products. For example, people call and say that they see we are a Dahon dealer. I confirm that and then they go on to ask if we have any in the store. It seems that they have called or visited other stores to find that while those stores are dealers there are not any or many models to see and test.

Sooooooooo I thought some blog entries might be helpful for our prospective customers. We have many, many Dahons. As of this date we have:

We have Dahons in transit (Ciaos). We have an extensive pre-season order that is being filled by Dahon as their containers of bikes arrive in California.

That's the Dahon news for today.
Posted by John Brunow at 10:26 AM No comments:

The Recumbent Blog has been an excellent resource for recumbent enthusiasts since 2005. Alan Barnard maintained the commercial-free site, providing many excellent bike and accessory reviews, photos, and recumbent tidbits. It was one of the few bike blogs that I checked on a regular basis.

Alan's focus had changed from writing about recumbents to writing about bicycle transportation when he began using his bikes for his daily commute and for local trips.

You may have noticed that an increasing number of my posts fall outside the realm of what would be considered appropriate for a “recumbent blog”. As my focus has moved away from recreational cycling toward transportational and utility cycling, my interests have also grown to include bikes other than recumbents. This is a good thing, but I sometimes feel as if I'm doing my readers a disservice by veering off the advertised topic too often. So, at some point in the not too distant future, I'll be starting a new blog with a broader focus that encompasses any and all topics related to using bicycles for transportation. The new blog will continue to celebrate the beauty and elegance of bicycles, as well as the joys of bike riding, while simultaneously focusing on bicycles as instruments of change; in my view, these are not mutually exclusive concepts.

We look forward to reading his new blog and we suspect it will continue to include many entries about recumbents. What better bike to use for transportation cycling. We use ours for our daily commute to work, to get groceries with our trailer, and for touring and recreational rides. We just happen to like to be comfortable while riding. We'll miss The Recumbent Blog.
Posted by Bruce Wright at 10:29 AM No comments: