In the halls of Congress

The U.S. House of Representative held their Green Expo yesterday and bikes@vienna participated. Our participation lead to a couple of unique experiences for me. I had to take the bikes in the bikes@vienna van to be bomb scanned on Wednesday morning. The Capitol Police use dogs to sniff out bombs and I'm there wondering if the dog will react to Java's (our chocolate lab shop dog) scent which has to be very apparent. Nope not then or not on Thursday when they screened the van to pick up the bikes.

After unloading the bikes and promotional material at the Longworth Building I had to move things through the tunnel to the Cannon Building. How do you move bicycles, a tricycle, and a trailer loaded with catalogs? Well I hook the trailer to a bike and ride it. I'm wearing my bright orange helmet, bikes@vienna uniform (t-shirt and jeans) and a big smile as I pedal first through the tunnel and then down the third floor corridor of the Cannon House Office Building. It was fun! Most people that saw me would initially look surprised and then get a big smile.

On Thursday Bruce enjoyed riding through the halls of Congress while I retrieved the van and went through security. He said people had a similiar reaction to seeing him ride.

I see a new opportunity to speed up government......those hallways are long so allow people to ride bikes. I suppose that you could allow some people to use roller skates, but I don't sell roller skates.
Posted by John Brunow at 8:20 AM No comments:

Wednesday night I participated in the Vienna Halloween Parade twice. I marched with the Rotary Club of Vienna in position 17 and rode with the bikes@vienna entry at position 84. It was double the fun.

The rain fell off and on during the parade. I imaged that the crowd would be very small and I was very wrong. People lined Maple Avenue under umbrellas, pop-up tents, and tarps. This event is a signature of this communities' effort to be a small town. Rain was not going to keep people away. Rain that had been scarce for so long was almost embraced. I did not hear any comments about "too bad it's raining". The opposite reaction I did hear----"isn't this rain wonderful".

The Rotary Club was behind a group of librarians with book carts. We moved out on to Maple and there was a whistle. This was not just a group of librarians pushing book carts! It was a precision drill team! I laughed many times during the parade as the whistle would sound and the group would perform. The spectators at the curb would always break out in laughter and hoots of joy.

The librarians inspired our Rotary Group to adlib a routine using umbrellas. We were far from coordinated, but by the time we reached the reviewing stand we were getting better. We need to watch a video clip of Gene Kelly doing "Singing in the Rain" if we do this again. We need to watch the clip over and over.

I hustled back to the store to join our small band of riders and we navigated the back streets to get to the van that was holding our place in the parade. We then made the trip down Maple Avenue behind a high energy performing troop. It is fun to ride and wave to people you know. It is always a joy.

We had a dozen riders. I thank each of them for helping me to publicize bikes@vienna.
Posted by John Brunow at 7:54 AM No comments: 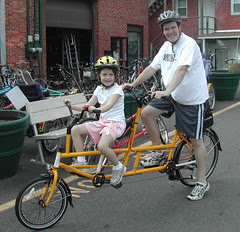 Rushforth
Originally uploaded by bikes@vienna
The Rushforth family was the first to rent the Kidz Tandem that we received on Thursday. It is a tandem that I saw at InterBike and ordered. I rent it for the same rates as the upright tandems.

Note the smiles and the position of the young person being in front. Ty Rushforth hoped that the experience would give his daughter the confidence to ride without training wheels. She was reluctant to ride the tandem at first, but warmed to the experience and when they got back from their family ride she was glowing with excitement. For more information about the Kidz Tandem go to Kidz Tandem
Posted by John Brunow at 8:29 AM No comments: