Well, I figured it was time to post a list of what we have in the way of Bromptons currently. A quick primer on model nomenclature:

S - straight bar, which you see on the far left of the photo, the raciest position.
M - the traditional Brompton bar, giving a comfortable, upright position.
P - a "butterfly" shaped bar, giving multiple hand positions, sort of the best of both worlds.

You can see the bars, in the order listed, pretty well in the photo below: 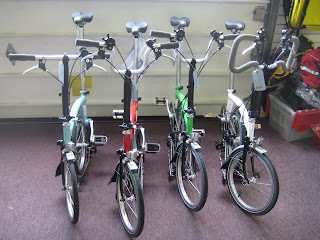 The "extremities" are the front fork, rear frame, and handlebar stem.

So what we currently have is:

M6Rs in the following colors:

Turkish Green/Black Extremities (1st on left in photo)
Posted by Tim at 2:45 PM No comments: 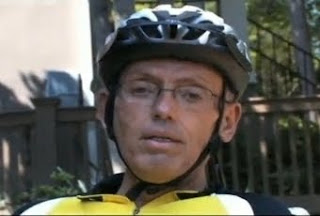 Our customer Mike Hamlin sent us a letter this week asking that we help publicize the formation of a team to ride on the Seagull Century and raise money to fight Muscular Dystrophy.

"Miles for Muscles" is partnering with "Stone Circle of Friends" to raise awareness and provide research funding for Myotonic Muscular Dystrophy (MMD) through our cycling team. Mike Hamlin, a one time avid cyclist with Myotonic Muscular Dystrophy, is inspiring folks to join him on this 100 mile ride. Mike is no longer able to ride a bike, so he is riding a recumbent trike instead. Join Mike on this adventure.  Together we can cross the finish line for a cure.

http://milesformuscles.com/seagullcentury.html
Posted by John Brunow at 10:55 AM No comments: 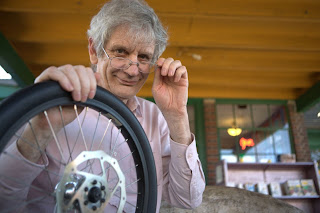 The cycling industry is filled with interesting people and Ian Sims of Greenspeed is a person of creativity and vision.  We are pleased that Ian will be visiting bikes@vienna on Monday, June 14.  We like to invite you to meet him and hear about his work in developing Greenspeed trikes and growing an international business from his home in Austrailia.

We'll have a social gathering at the store from 7 PM to 8:30 PM.  It will be a meet and greet with Ian taking questions about his work, his products, and his vision for the future of cycling and tricycles.

We anticipate that this could become a good sized event so we'd ask that you email us if you plan to attend.   Please send your email to john@bikesatvienna.com.
Posted by John Brunow at 8:46 AM No comments:

The dealer newsletter for TerraTrike says that the delivery of the first container of Rover trikes is delayed until mid June.  TerraTrike says they are repainting the frames,  The initial samples did not meet TerraTrikes standards so it is back to the paint booth.

I have been telling callers for two months that the trikes would be arriving the last week of May.  I'm sorry, but we're waiting together for this trike which sets a new price point for the recumbent trike segment of our business.

I'll report the news as I get it.
Posted by John Brunow at 3:36 PM No comments: 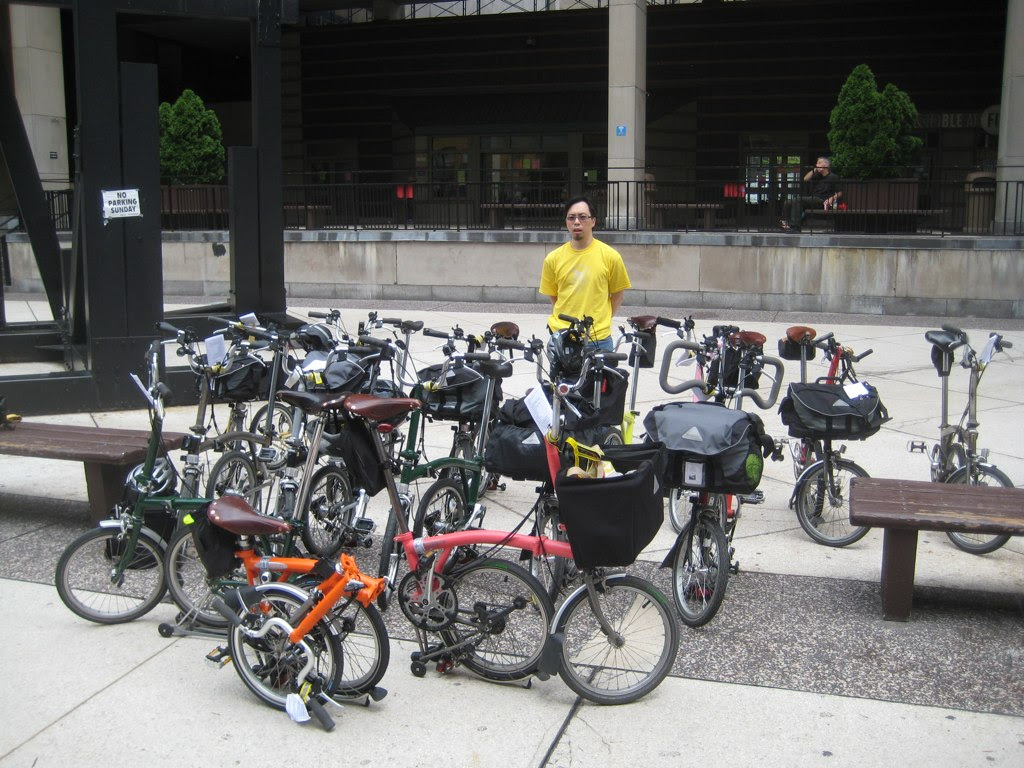 You may remember back in March when I (Tim) rode in the first Brompton US Championship, a wacky race in Philadelphia modeled on the Brompton World Championship, where folks in "business attire" (jacket and tie) race Brompton folding bikes. Well, at the BUSC, Steven Huang, graphic artist (he did the graphic for the 2009 BWC and 2010 BUSC shirts... that's him standing behind all our bikes before the ride) and employee of Bfold Bikes in NYC, was passing out fliers for a "Brommie Yummie Ride". What he had in mind was a ride around NY with a group of people on Bromptons, stopping and eating at a variety of dining establishments... a sort of "progressive meal by bike". I was intrigued, but not sure if I could make it. 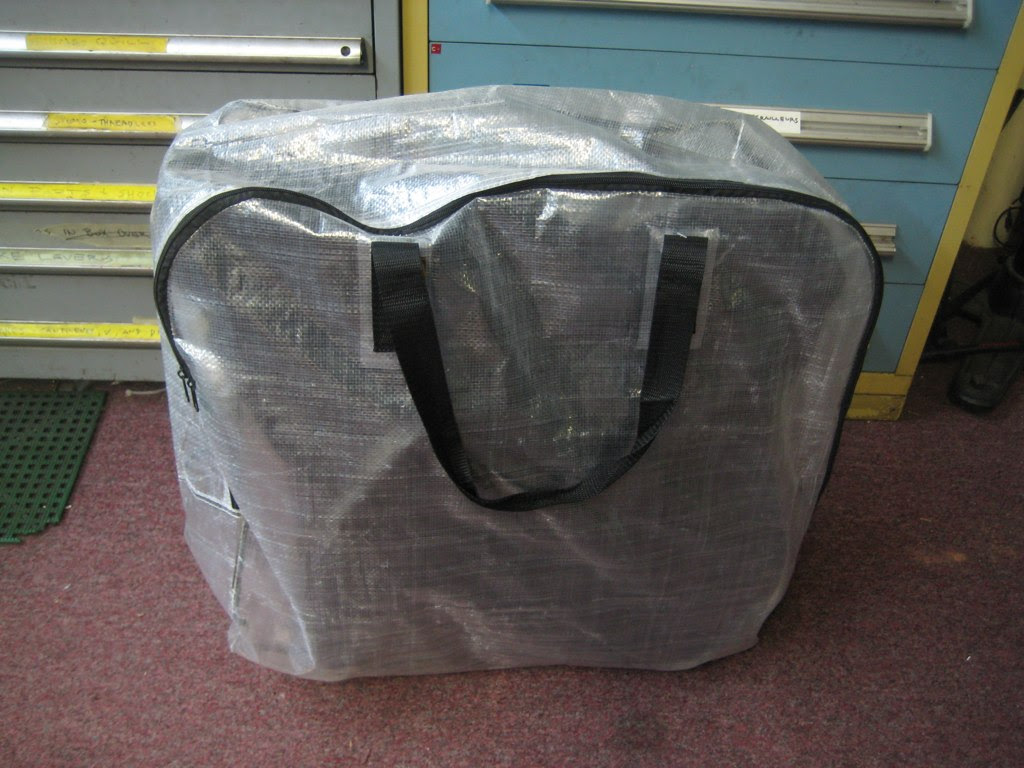 Well, John was kind enough to give me the day off, so off I went on a bus to the Big Apple, with my trusty Brompton P6R safely (I hoped!) stowed in the cargo bay. Based on a suggestion from Steven, I covered the bike with the standard Brompton "slipcover", and then tucked that package inside a cheap tote bag, the Dimpa bag from Ikea. I would ordinarily have used the wonderful B Bag from Brompton, but it really is too bulky to carry around on the bike all day, so the cover and Dimpa seemed a good choice. All in all, it worked out just fine, but I was glad I could "supervise" the loading and unloading closely! 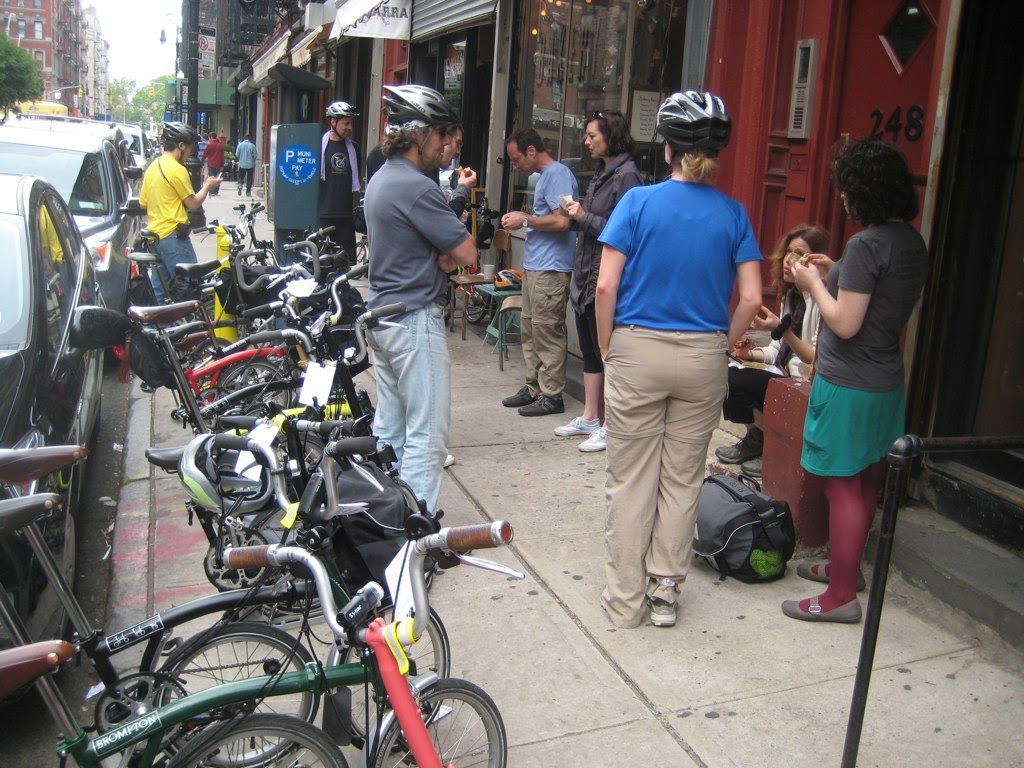 About eighteen riders (including four of us from the DC area, including Ollie Brock, bikes@vienna customer and top ten finisher at the BUSC) gathered near Penn Station at noon. After some getting acquainted and the obligatory taking of photos by everyone with a camera (myself included), we set off for our first destination... Babycakes, a vegan bakery which had some truly amazing treats for us. My choice was a cinnamon bun sweetened with agave... amazing! Here's a shot of riders and bikes outside, enjoying the treats.


Despite being issued cue sheets, I don't think any of us realized that our next stop was a matter of a few blocks away, at the Doughnut Plant. I never knew there was such a thing as "artisanal doughnuts, nor that there was a "trend" of such things, but apparently this place was/is at the forefront of that movement. And they did have some truly delicious offerings, although I preferred the cinnamon roll at Babycakes. 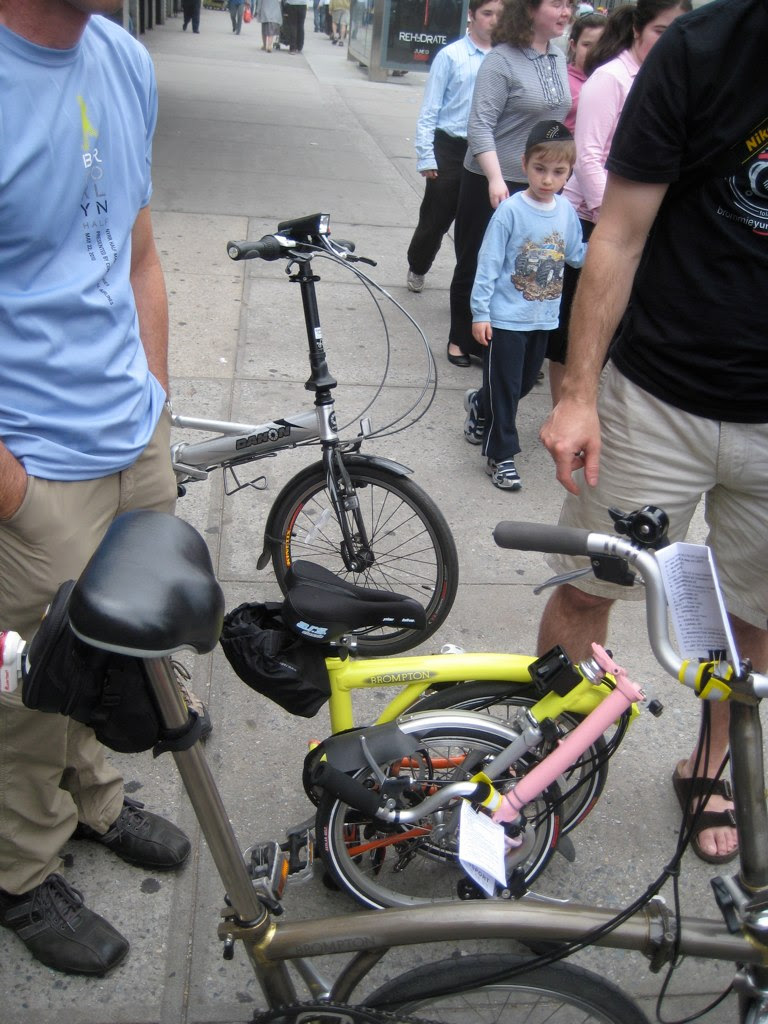 While feasting on doughnuts, we were joined by an "interloper" of sorts... a fellow on a Dahon who had dropped in at the start of the ride, and mysteriously appeared later along our route at Doughnut Plant. Coincidence? I don't know. But here's his bike peeking out behind the multicolored Brompton ridden by David Lam, owner of Bfold Bikes.


Lest you think this whole day was about nothing but eating, we actually did do a fair amount of riding, about 10 - 12 miles through parts of Manhattan and Brooklyn. We had a fun ride across the Manhattan Bridge, stopping to admire the view, while I also took some time to look at the structure of the bridge. I've always been fascinated by bridges, and the design and engineering behind them, and New York has plenty to look at. 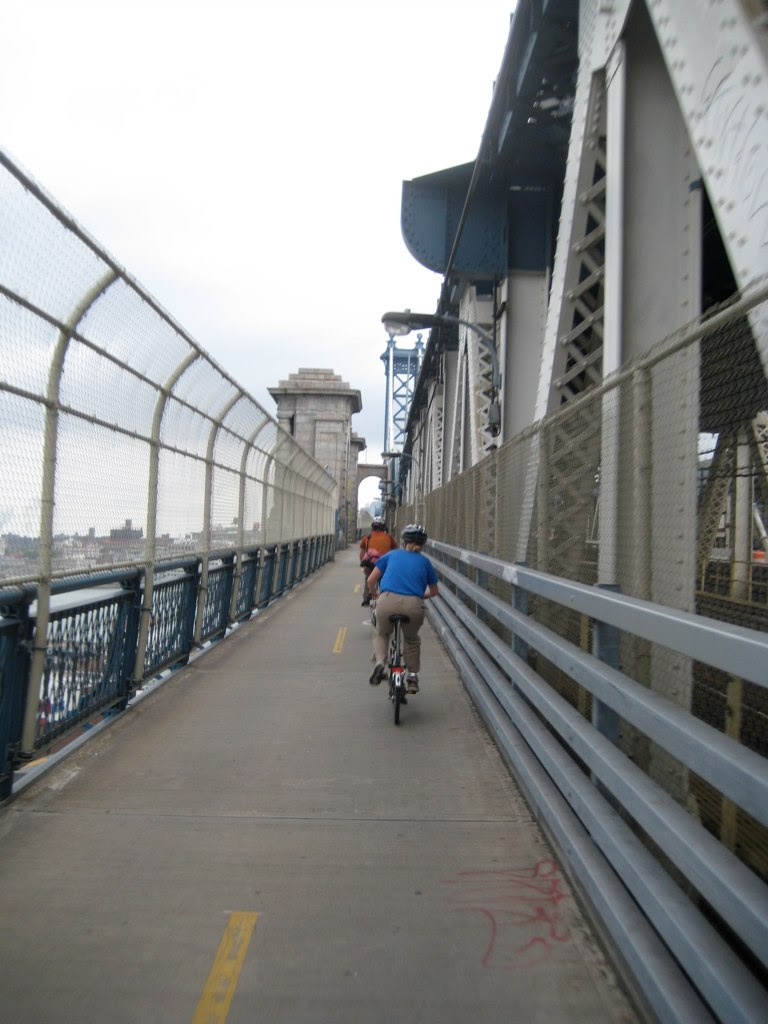 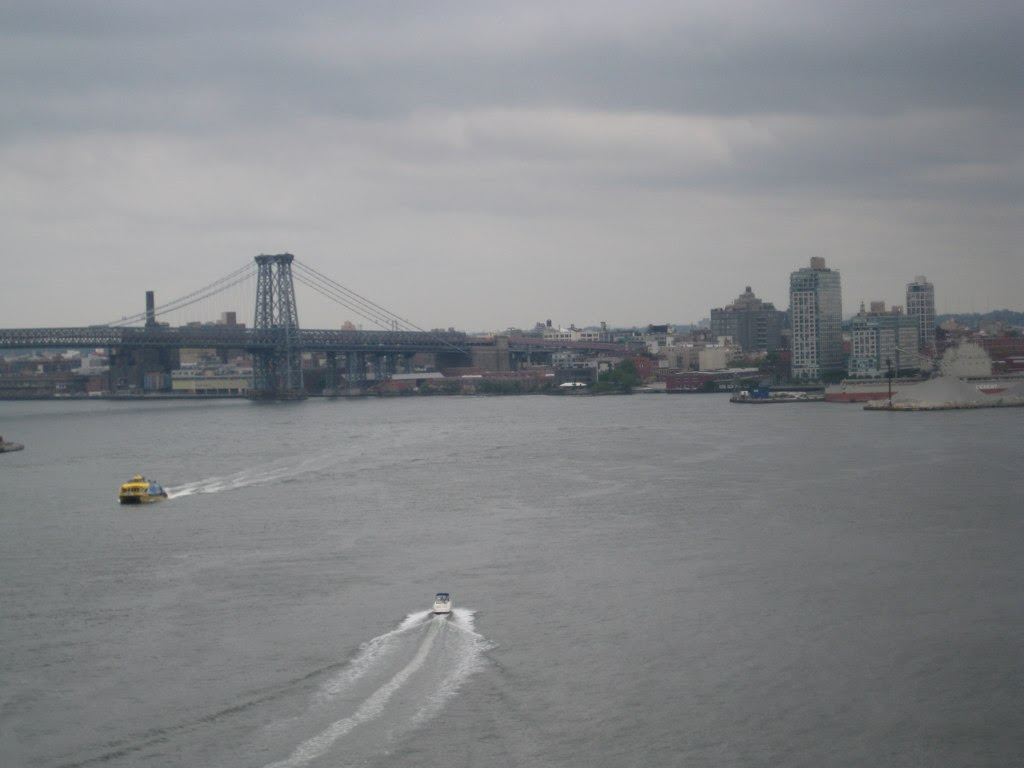 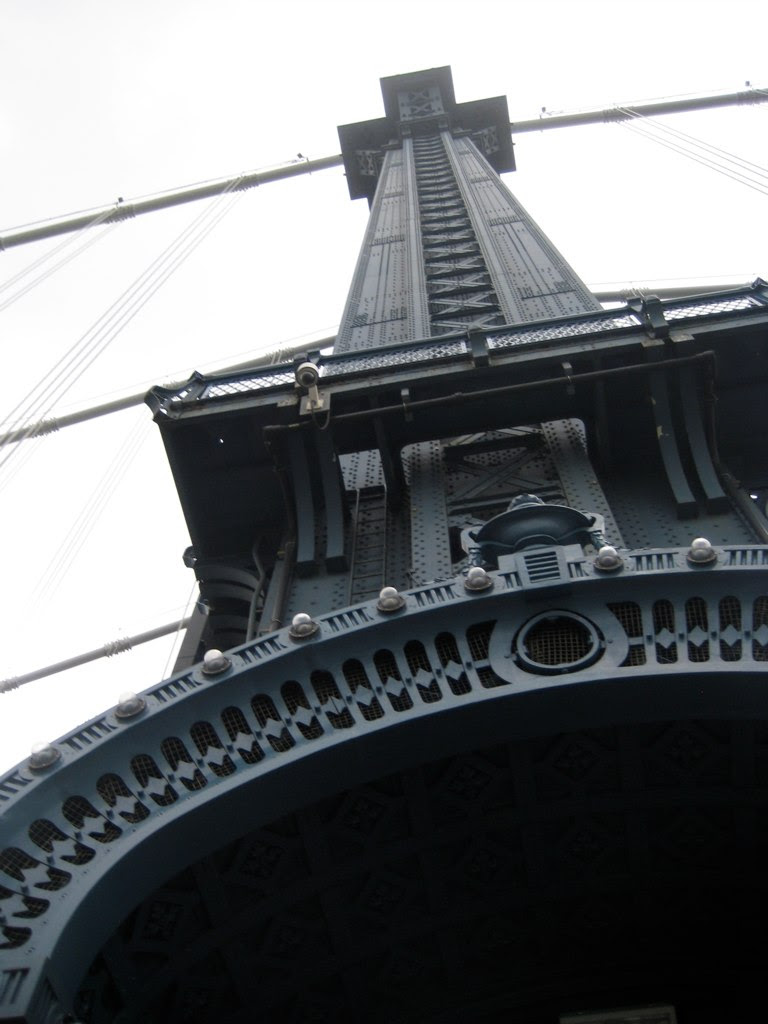 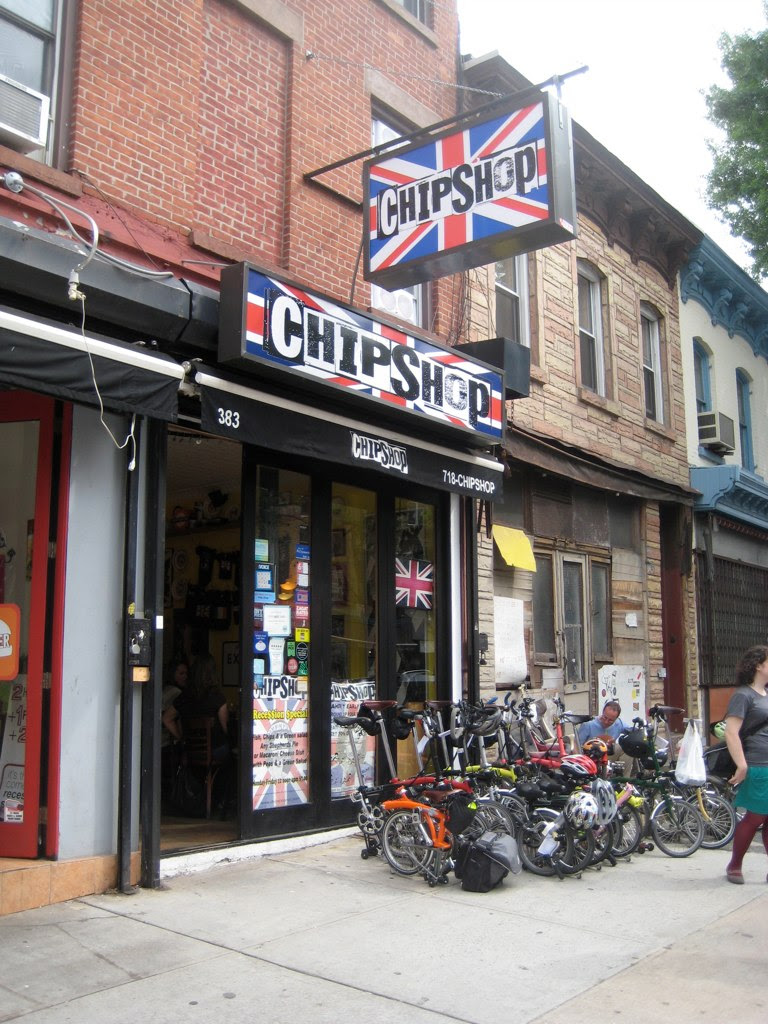 Once in Brooklyn, we stopped and picked up our lunches at The Chip Shop, which features food with a British theme. My lunch consisted of a delicious Wild Mushroom Shepherd's Pie, Mushy Peas (an odd British twist on peas), and of course, a heaping pile of chips, known to us Yanks as fries. The restaurant was small and crowded, so we remounted our bikes and headed to a park on the Brooklyn waterfront, adjacent to the Red Hook Ikea, located in what used to be the Todd Shipyard, apparently. 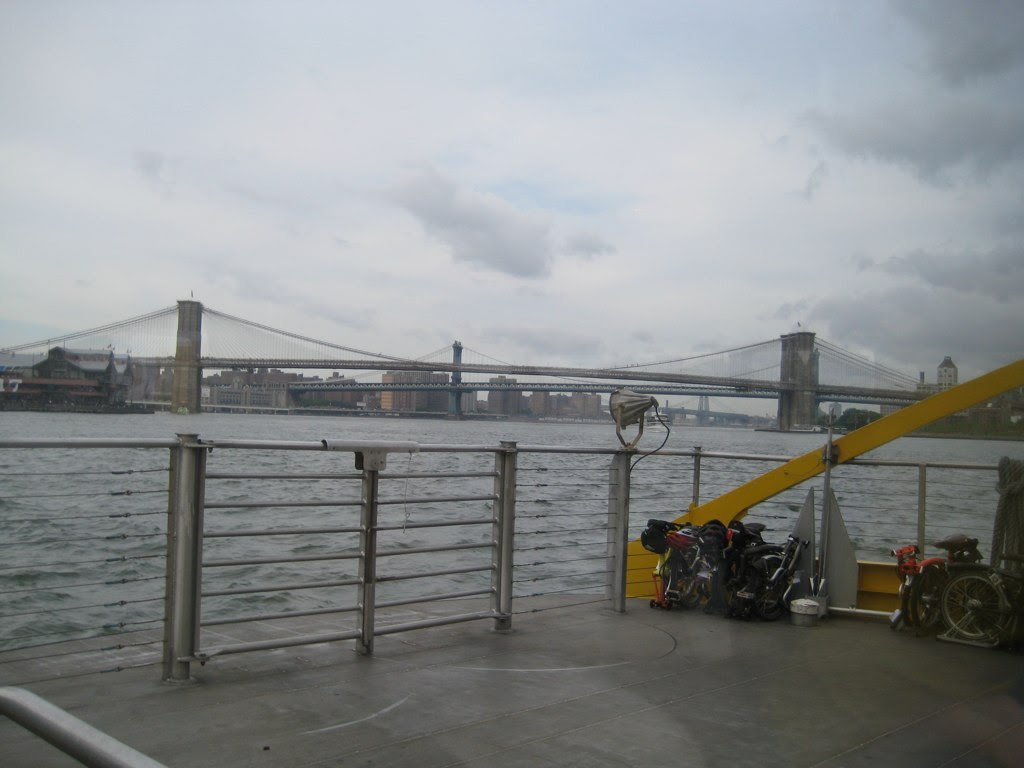 After that, it was a free water taxi ride back to Manhattan, with some great views of the Statue of Liberty and the Brooklyn Bridge. It was pretty funny seeing all of our bikes clustered on the foredeck of the boat. We drew a lot of attention everywhere we went, but I think the "show" of us all carrying our bikes off the boat and unfolding and riding off was the best.

All in all it was a great day. While the DC area got a pretty heavy downpour, we didn't feel a drop of rain all day, and enjoyed good food, fine company, and Steve's wonderful commentary as we rode along. He told us lots of fun information about the sights we saw, and really set a positive, fun tone for the day. It was a great way to explore a part of the city and meet new people with a common interest. More rides are planned later this year, and Steve even talked about working with the DC contingent to organize a similar event in the future. We'll keep you posted!

Meanwhile, more of my photos can be seen here:

And Steve's site about the rides is here: 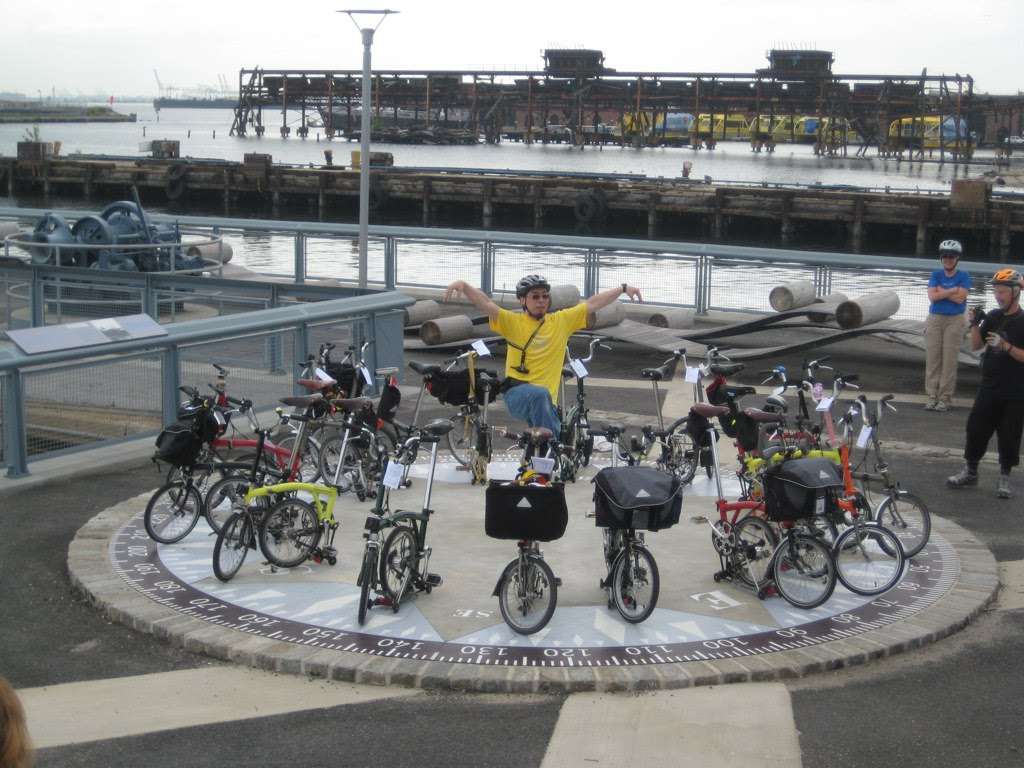 This final photo is Steve, doing the crane stance from "Karate Kid" surrounded by all of our bikes on a compass in the old shipyard. One of many delightful moments in a great day.
Posted by Tim at 10:42 PM No comments: 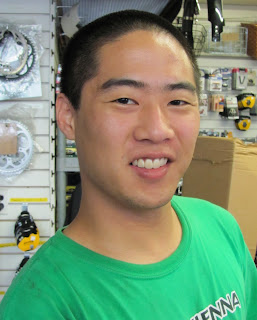 We are pleased that Daniel Nanovic has come in to help us in the store. Daniel is a college student. His father, Roy Nanovic, has been a long time recumbent rider and customer of bikes@vienna. Roy rides a Barcroft Dakota. We're working on Daniel. 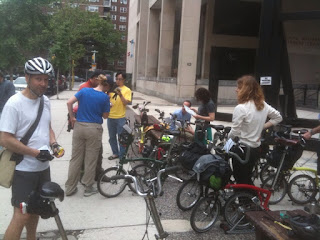 Folks gathering for the ride!
Posted by Tim at 12:10 PM No comments:

Jeff Heil helping us be better 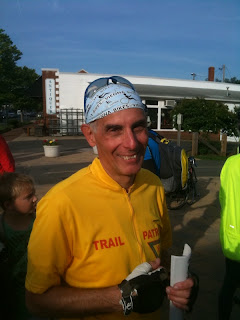 I snapped this photo of Jeff Heil on Friday morning.  Jeff is working at bikes@vienna three days a week (can you see that logo on his bandana?).  Note his W&OD Trail Patrol jersey because he volunteers to help with the trail patrol. Jeff writes articles for Spokes Magazine.  He has a blog you can visit http://yellowbiketales.blogspot.com  It is a joy to have Jeff helping us in the store.
Posted by John Brunow at 7:46 AM No comments:

A Terrific Bike To Work Day

It was a day of sunshine, smiles, and miles of pedaling as cyclist throughout the Washington Metropolitan region made their way to work by bike and trike.  In Vienna there were 350 riders registered.  For the second year the Vienna Pit Stop was held at the Town Green.  Whole Foods provided beverages and bananas.  Spokes Etc had a number of employees helping and again Jeff Palmer of Spokes was the Pit Stop Manager.  Tim Fricker and I plus Hunter McCleary of Fairfax Advocates for Better Bicycling had the good duty of handing out the coveted BTWD t-shirts. 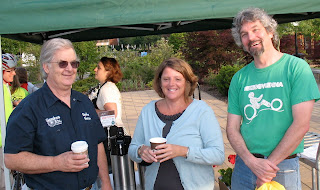 From left to right, Jeff Palmer of Spokes Etc, Cathy Salgado, Director of Parks and Recreation for the Town of Vienna, and Tim Fricker of bikes@vienna. 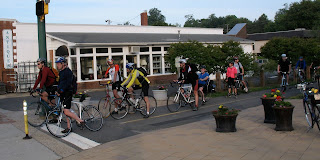 Riders waiting for the crossing light at Maple Ave. The traffic on the W&OD Trail was busy most of the morning. 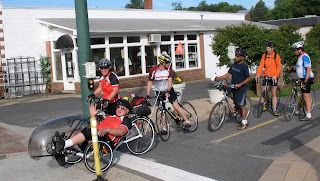 Our customer on the Catrike Expedition waved just as I snapped the photo.  His arm is hidden by the bollard.  The impression is that the bollard is topped with a realistic looking hand.
Posted by John Brunow at 7:01 AM No comments:

Coming Up This Week 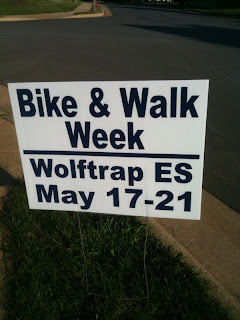 Jeff Anderson has signs up in the Wolftrap Elementary area as he
promotes cycling and walking to school. We took event bike rack to
the school to support their bicycle school bus on Wednesday.

If you have an activity which could promote better health through
cycling and you need bike racks ........call us

Posted by John Brunow at 7:34 PM No comments: 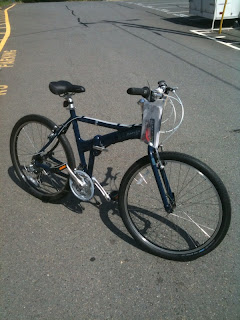 On Friday we received a new Baltic Blue Dahon Expresso. It has an
impressive list of upgrades from last year. On the improved list are
the Big Apple tires, Altus rear dérailleur, plusher saddle, MRX
shifters, and now magnets to hold the bike when it is folded. You
should come test ride it.
Posted by John Brunow at 10:35 AM No comments: