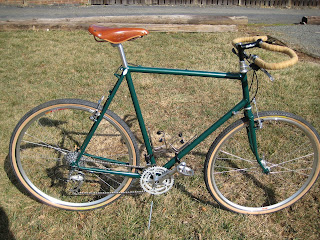 As many of you know, I've got a LOT of bikes! The latest count is nineteen and a half (the half is a unicycle that I still need to master), and to the left here is the latest.

What sets this bike apart is that I built the frame myself! Some of you may recall, quite some time ago, I went away to United Bicycle Institute in Ashland, OR, to learn how to build bicycle frames. Well, the bulk of the work was done there in class, but there was still a fair amount of clean up filing and basic frame prep, and then painting. For a variety of reasons, the process too a lot longer than I expected, and even ground to a halt a few times (motivational malaise). But finally, in the last few months I've gotten more energy and threw myself at several projects, assembling several bikes I hadn't gotten around to, and then finally getting this bike finished.

My basic intent was to design a bike for long distance, loaded touring, for both on road and mild off road use, such as the C&O Canal, one of my favorite places to ride. The design borrowed heavily from my 1986 Miyata 1000 touring bike, but I made a few changes. The most noticable was building in clearance for bigger tires with fenders... the Miyata takes 38mm wide tires, but this bike should handle 42mm with fenders. My idea with that was to get a little more cushion and traction for off road use. I've done the Canal with the Miyata twice now, and it was just dandy, but I wouldn't mind a little bigger tire.

The other major change from the Miyata was the use of slightly larger diameter tubing for the top and down tube, with thinner walls. I did this partly just to see how it affected the ride, but with the notion that it might produce a slightly lighter frame that is just as stiff as the Miyata. It's too early to tell about that yet, but we shall see.

Anyway, I'm really excited to finally have it up and running. Several folks have taken it for short spins, and the reviews have been favorable! I sure like it. And in time, I hope to be able to build some more frames, both for myself and others. I'll keep you posted.

To learn more about the bike, and to see more pictures, go to my personal blog:

Which has links to my Flickr album as well.

Or come on by the shop to take a look at it. And if you are fairly tall, you can even take it for a spin.
Posted by Tim at 10:47 PM No comments: 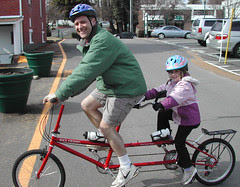 Chris Anderson Family Tandem from Bike Friday
Originally uploaded by bikes@vienna
The Andersons ordered a Bike Friday Family Tandem for their planned ride on the C&O Canal this summer. The family purchased a Burley tandem from us a couple of years ago. They chose this Bike Friday because it is so adaptable to allow even the largest family member to ride with the smallest.

They have some training to do for this ride. You'll see them on the W&OD getting ready for their C&O Canal adventure this summer.
Posted by John Brunow at 5:59 PM No comments:

On Friday I delivered a Draisin Twister to the Tockwotton Home in Providence, Rhode Island. The photos show Judy Brown and Joe Trott on a test ride after we had reviewed the features of the Twister. They rode a little and then switched positions.

This Twister is going to get lots of use as Spring comes to Rhode Island. The Tockwotton Home is in an older section of Providence with streets that seem quiet. There is a bridge over a major highway to a trail which runs for miles. The Twister has independent pedaling and an electronic motor assist which will allow Tockwotton Home residents to enjoy as much or as little pedaling as they can manage. The seat on one side of the Twister has a five point seat belt and pedals which have a plate and velcro straps so an individual who could not use typical cycling equipment can go for a fun filled ride. Twisters come with hydraulic disc brakes in the rear and hydraulic rim brake on the front. The front can be used as a parking brake which comes in handy as riders get on and off.

With true German engineering the Draisin folks have thought of so many nice features. The electronic assist requires pedaling by a rider to be functional. You can't just turn on the throttle to have an electronic go-cart for two. There is a sensor that measures the pedaling and allows the assist motor to work. The independent pedaling can be turned off and on with the flip of a switch. So you can start out with both riders doing synchronized pedaling and then if one rider tires then the independent pedaling can be activated. The handlebars can be swung away from the seats to allow easier mounting and dismounting of the Twister.

Judy Brown is Program Direct at Tockwotton Home. I'm looking forward to hearing about the Twister's use by residents, staff, and families during this year. With the current location of the home and plans for development of a new location there will be many hours of riding pleasure for all. If you want to learn more about Tockwotton Home go to http://www.tockwotton.org/
Posted by John Brunow at 9:35 AM No comments: 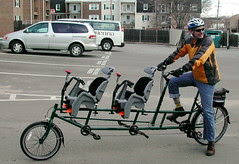 DenneyTriple
Originally uploaded by bikes@vienna
This summer on the W&OD Trail and around Arlington you will see Charlie Denney riding with the twins. Their mother, Mary, ordered this Kidz Triple for a big family Christmas present. Cycling is important to the Denney family and now they have the Triple to enjoy. 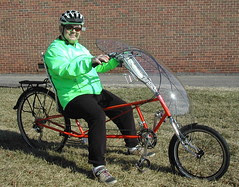 HarveyNewRide
Originally uploaded by bikes@vienna
bikes@vienna patron, Harvey Stackpole picked up his new Easy Racer Tour Easy last Saturday. Harvey truly is a patron given the number of bikes he has purchased from us. This Tour Easy is a beautiful recumbent which Harvey selected in orange. The design of the Tour Easy has not changed much in three decades, but it is a remarkable bike.

When you see Harvey give him a big wave and a smile.
Posted by John Brunow at 6:46 PM No comments: 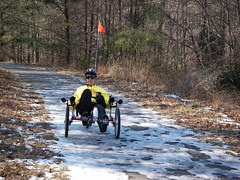 Yvonne'sTrice
Originally uploaded by bikes@vienna
Yvonne is an avid cyclist who is trying to come back from an accident that forced her to find a solution other than a two wheel bike. She visited the store mutliple times test riding trikes. This last week she made her decision and I was pleased to get this note from her today.

"I want to thank you for your patience and help as I picked out a trike. Today we took a 24 mile ride from West Springfield, to South Run, to Burke Lake, down route 123, through Crosspointe and Lake Mercer, and back home. It was a great experience. I was able to clip in, which I wasn't doing on my upright bike. I had no trouble on ice or gravel, went faster down hills, and climbed smaller hills fine (will soon try bigger ones). I had faster starts at intersections, because I didn't have to worry about balance, so I didn't have to walk across them anymore."

From the photo it looks like Yvonne was able to ride where most of us can't in icy surroundings.
Posted by John Brunow at 6:44 PM No comments:

We've held our service rates stable for a number of years, since some time before I (Tim) started working here in 2005. However, time marches on, and the cost of doing business does get higher every year. As a result, we have made some changes in our service prices, which are reflected here:

In addition, we have attempted to clarify and standardize some of the commonly requested services. You will see we have grouped the specific items into categories that hopefully will make it easier to understand our services and the costs involved.

There has been no change in our Continuing Care policy. If you bought your bike new from us, you still receive free service when the standard fees for the service total $20 or less. This is true for as long as you own the bicycle.

I'd also like to take this opportunity to remind folks that we get a major rush of service requests when the first warm weekend of spring arrives, and that usually means you have to wait longer to get your bike back. So why not take advantage of this "slow" season and bring your bike in before the end of March for servicing? We should be able to get it back to you quickly right now.
Posted by Tim at 8:44 PM No comments:

I received this information by email.

Experience the beauty of the Shenandoah Valley by bicycle: Come ride 100, 50, 25 or 5 miles of scenic roads in the 18th Annual Shenandoah Valley Bike Festival on July 25thand support Our Community Place. Your small donation includes the registration fee, a t-shirt, ride maps, ride support, rest stops, mechanical support, water and Gatorade, and shower facilities. Stay for a free homemade lunch afterward. An informational pizza dinner will be held in advance for those interested in volunteering instead of riding. For more information and registration, go to ourcommunityplace.org/bikefest/ or Active.com. Questions? Call (540) 442-7727 or (540) 433-7738.
Posted by John Brunow at 12:33 PM No comments: