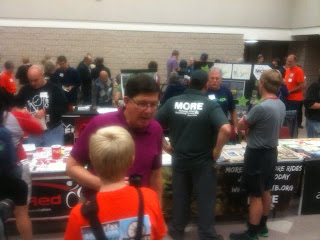 Tim's at the first ever Fairfax Bike Summit today!
Posted by Tim at 10:36 AM No comments:

MARK YOUR CALENDARS!!!!!  It's one week until the Vienna Halloween Parade!  That's right, Wednesday, October 24th is the big night.  Come one, come all.  We can set you up on one of our bikes or trikes if you can't bring your own!  We're meeting at the shop at 6:00 pm to get ready, then riding to the start point around 7:00.  Food and beverages afterwards at the shop!
Posted by Tim at 10:55 PM No comments: 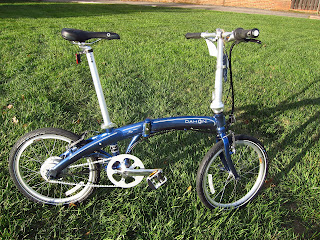 There's been a lot of buzz on the internet, and in the industry as a whole, about Tern, the new folding bike company founded by Josh Hon (son of David Hon, founder of Dahon). And there's good reason for that... they've produced some fine bikes in their first year of business.

But let's not forget Dahon! This year brought several new models, and more is in the works for 2013.  Here's a look at some of the new offerings we have here at bikes@vienna. 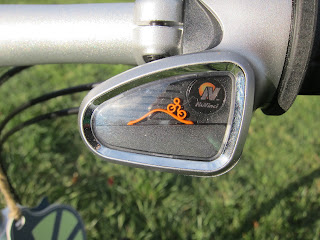 First up is the Mu N-360. Based on their proven and popular aluminum Mu frameset, the N-360 comes equipped with the NuVinci N360 "the first continuously variable transmission for bicycles."

What's that mean? Well, unlike other shifting systems, there are no distinct "clicks" relating to specific sprocket combinations. Rather, the ratio of pedal to wheel revolutions is seamless... think of it like a volume nob on your radio. You can see the shifter to the right... instead of numbers, there's a little graphic of a bike and the "terrain" the ratio is appropriate for; in this case, climbing a hill.  It's a neat system, and worth checking out. 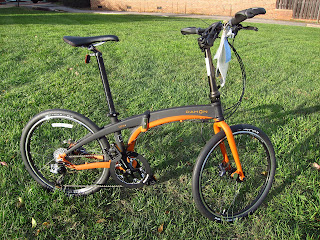 Next is the Ios S9, a 24" wheel folder with a high quality set of components, including SRAM X9 derailleur, Schwalbe Kojak tires, and Avid hydraulic disc brakes, a rarity in folding bikes. This bike also features Dahon's Flat Pak stem and Ergon grips with bar ends, which allows you to fine tune your riding position. The 24" wheels provide a "big wheel" feel in a bike that folds down into a remarkably small package. 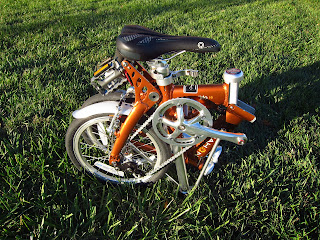 Finally, we have the Jifo 16, a totally new design from Dahon that folds down to a tiny package in a matter of seconds. With a single speed drivetrain for simplicity and reliability, the Jifo might be just the right choice for your commute by bus, train, or subway.

To the right is the bike folded and ready to carry. 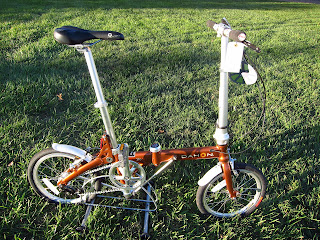 And here it is, unfolded and ready to ride!

Folding bikes just keep getting better, and it's a great time to include one in your life. You'll be amazed how handy they can be.  So come on in for a test ride soon!
Posted by Tim at 2:14 PM No comments: 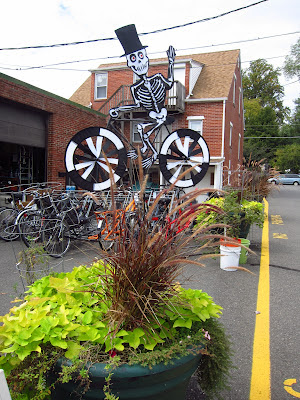 Thanks to Daniel, we now have our first Halloween decoration out front... spooky!  And fun.

And a great opportunity to let folks know that we want all of you here to ride in our little part of the Vienna Halloween Parade!  That's right, on Wednesday, October 24th, Vienna is continuing a 65+ year old tradition, where Maple Ave. is shut down and all manner of groups walk and ride their way down the street. We encourage you to bring whatever bike or trike you ride, or you can borrow one of ours. Folding bikes, recumbents, trikes, even trike trains are welcome and encouraged!  Watch this space for more news as it develops!
Posted by Tim at 1:18 PM No comments: