I'M READY for our concert on the Town Green 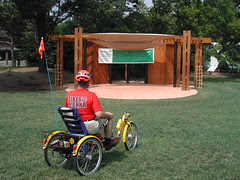 I'M READY for our concert on the Town Green
Originally uploaded by bikes@vienna
Friday, August 24th from 6:30 to 8:00 PM bikes@ vienna is sponsoring the concert on the Vienna Town Green. I'm promoting the idea of people riding their bikes to the concert. Call it a "Ride In" if you will. The Town Green is next to the W&OD Trail between Maple Avenue and Church Street. It is a perfect venue to reach by bike.

I want to set aside some space near the performance space to park trikes so people can sit on their trikes and enjoy the music. I'm trying to set up a parking area for other bikes so people can leave their bikes and not worry about them.

The musical entertainment for this concert is a group called the NiteHawks. They are a swing band that features the music of Glenn Miller. As you may know, Glenn Miller was an Iowan. His music has proven timeless and I'm certain you'll have a good time if you join us on August 24th.

Now as the photo indicates I'm just waiting for the concert. Please mark your calendar, tell your friends about it and ride your bike to it because it is going to be fun.
Posted by John Brunow at 1:32 PM No comments:

Wishing I was there 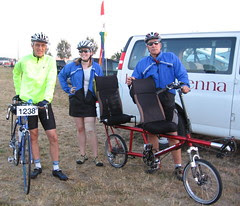 FlashSara&I
Originally uploaded by bikes@vienna
I woke up this morning in my bed on Moorefield Road in Vienna and wished I was somewhere half a country west of here. I knew that in Rock Rapids, Iowa the sleepy beginnings of the day would be turning to excitement and adrenalin as thousands of cyclist began making their ways to the lines of port-a-potties, began folding their tents, began pumping their tires, and finally began riding their bikes. This morning the riders would follow the signs to the highway and the week of RAGBRAI would begin.

I took Java out for her morning walk, noting the temperatures in the low 60s here in Virginia. I’d have my jacket on to start this morning I thought. My friend Gene Crosby would be riding close by and describing the day’s route in great detail. Gene studies subjects and then kindly shares the information. We can ride for six or more hours with Gene having lots to share. RAGBRAI is the only time we spend together each year. We have a lot to catch up on.

In northwestern Iowa today people will be sitting in lawn chairs watching that parade. They’ll start out being wrapped in blankets. They’ll drink coffee, lemonade, and then beer. They’ll wave. They’ll call out “where are you from?” They’ll offer water, shade and mechanical help. They’ll point at the costumes that some riders wear. They’ll marvel at the bikes, trikes, quads, and an occasional unicycle. They’ll wonder why all these people are riding passed and they’ll watch for Lance Armstrong because Lance is riding all week this year.

The photo is from the first day of RAGBRAI last year. Gene is wearing his yellow jacket. Daughter Sara and I have a bright spinnie on the back of the Barcroft Columbia.
Posted by John Brunow at 8:32 AM No comments: