Recess Monkey at Jammin Java this Saturday at 11 AM

Our house is shaking from all the cleaning and preparing for a visit from the Holloways.  Ten years ago this month daughter Jessica and Drew Holloway were married at Hunter House in Nottoway Park just two blocks from our home.  A week later they loaded up a U Haul truck and drove across the country to Seattle.  A major reason for their move to Seattle was so Drew could pursue his interest in music.

This week Jess and Drew with daughters, Mira and Sadie come to visit.  It is satisfying that Drew and his Recess Monkey bandmates will be appearing at Jammin Java on Saturday and several other venues in the Washington area in the following week.  They also have performances in Philadelphia, Atlanta, and the Carolinas.  The three elementary school teachers have stayed in the classrooms as they have built success in the music business, note the kind words on the poster which appeared in Time Magazine in May.

I like success stories and even more in this case. 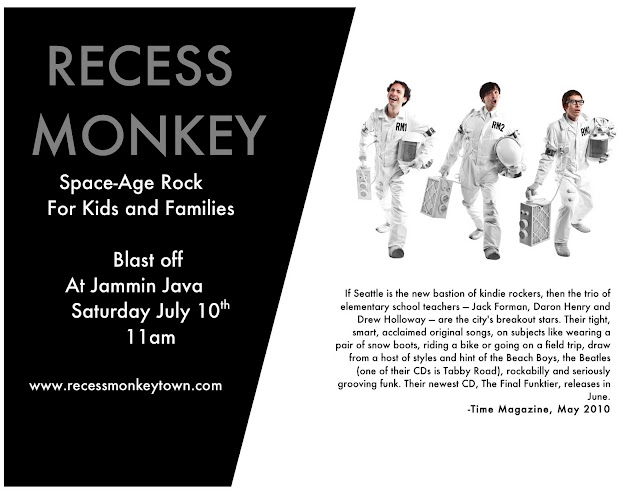