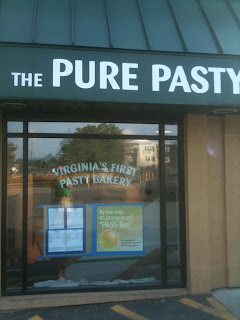 Our new neighbor on the alley, Pure Pasty, is opening in a few days. Mike has been baking test batches and as a good neighbor I've been taste testing. What is a Pasty? How do you take a traditional Cornwall food item and adapt it to be an organic, gourmet offering?

You can learn the answers to those questions and more by going to http://purepasty.blogspot.com

Posted by John Brunow at 6:54 AM No comments:

Headed home. Watch for more posts in the next couple of days.
Posted by Tim at 4:15 PM No comments: The ride was great fun! A short loop around downtown Las Vegas, culminating in a "parking garage hill climb", a new event to me. Basically you had about two dozen crazy people on folding bikes racing up the garage ramps to the top. I think the fellow here sums it up beautifully... thumbs up to us all for doing this early in the morning on what no doubt was a very full day for all of us. Of course, we didn't go unrewarded... or was it unpunished? At the top of the garage, we were treated, courtesy of our organizer, host, and general bicycle bon vivant Mike McGettigan (Trophy Bikes, Philadelphia) to Tastykake Krimpets (a Philly "delicacy"?) and a very small taste of whiskey! Trust me, this is NOT the breakfast of champions. But a fun and funny way to finish up a great little ride, the last to be held in Vegas.
Why is that? Well, it turns out that after many years, the organizers of Interbike have decided to move the even to Anaheim, CA, in early August next year. This decision got mixed reviews, with most shop folks dismayed at the timing. I suspect it's going to be a lot tougher for owners and managers to get away from their shops at that point in the season. We shall see.
Anyway, the Folder Frolic was a great time for all. And a chance to see a variety of folding bikes. At one point we had a sampling lined up for photos... you can see them below. Who can name all the brands? More Frolic photos are here:
2010-09-23 Interbike Folder Frolic
And the collection of my photos from the whole Interbike event are here:
Interbike 2010
Posted by Tim at 11:43 AM No comments: 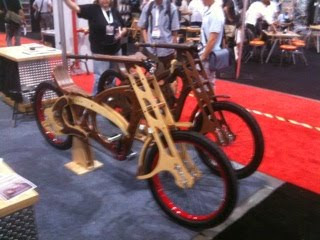 ...these wooden bikes from Masterworks. Fascinating and eye catching, but I wonder how they ride.
Posted by Tim at 7:03 PM No comments: 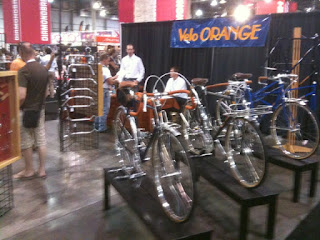 Velo Orange from Annapolis, MD are here, with their range of classically styled bikes, parts, and accessories. They are a strong force among the brands showing a distinct influence from classic French designs. Pretty stuff!
Posted by Tim at 5:49 PM No comments: 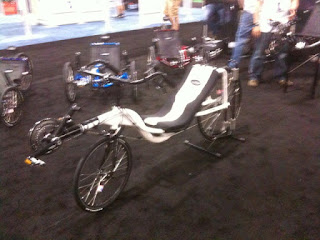 One of the few recumbent makers present this year, Catrike was showing their two wheeled Musashi, as well as their "R" series... An upgrade package featuring the Rival 10'speed group from SRAM.
Posted by Tim at 5:46 PM No comments: 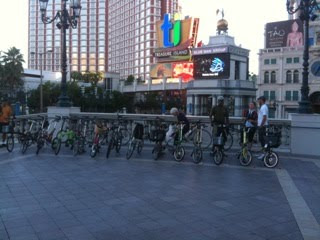 Gathering for the Frolic 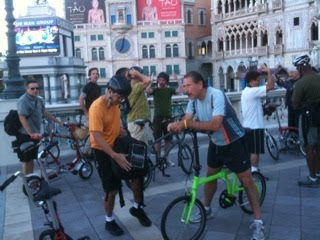 Off to the Folder Frolic!

It's a fun, early morning (7am) ride around Vegas on folding bikes, lead by Mike McGettigan of Trophy Bikes in Philly. I'll write more about it tonight!
Posted by Tim at 9:47 AM No comments:

One more post before I call it a night...

Also, I wanted to mention that a number of makers showed bikes with "mixte" style frames. That's a design that dates back at least to the 70s, probably earlier, that was intended as a "unisex" frame. It never really took off in the US market back then, but seems to be making a comeback now. Pretty much all of the higher end "urban" makers have at least one mixte, and even the more mass-produced bike brands are starting to show them, such as the Torker line from Seattle Bike Supply: The folks from Pashley of England were yet again showing their gorgeous bikes, from their classic "roadster" designs to their newer "clubman" bikes, inspired by the British club racing bikes of the 40s and 50s: I was surprised to learn that there are no Pashley dealers in the DC area. I imagine the market for them throughout the US is pretty small, but I would think this region would have some demand for a high quality, high fashion, "classic" design. But maybe I'm wrong. They're still awfully nice to look at.

Finally, there was a wacky "urban cycling" fashion show, sponsored by the folks at Momentum magazine: It was good fun, although I can't imagine people really riding around dressed as they were in the show. More pics from the fashion show are here:

Today was a full day at the show. I spent some time in seminars, and walked around the show floor, checking out what vendors had to offer this year.
Brompton showed their three new colors... Claret, Sage Green, and Bright Pink: There were also quite a few "urban" bikes on the show floor. In addition to the "Dutch style" bikes, there were also a number that seem to draw their inspiration from French city bikes. A good example of that was the Linus line of bikes: ... as well as the Globe brand, which made a point of displaying their bikes in sort of "lifestyle poses": Some really pretty bikes, in very evocative settings. Good marketing from these folks. It will be interesting to see how these urban designs do in various markets.
Posted by Tim at 12:48 AM No comments:

And Dahon Is Here Too 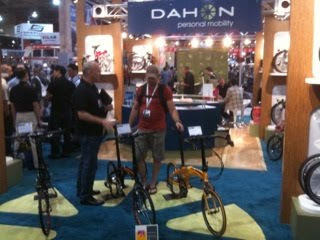 Showing some new models, including the Vector series, that look like replacements for the SpeedPro models. More after I get a chance to talk to them.
Posted by Tim at 7:26 PM No comments: 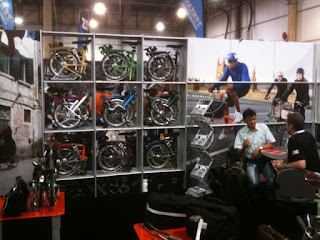 A much bigger and nicer display from our friends from across the pond. On display were the three new colors and the long awaited B-Pod hard carrying case. The colors look great and the case is a winner.
Posted by Tim at 1:50 PM No comments: 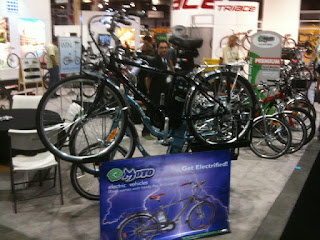 It's no surprise that electric bikes are big again this year. I've lost count already of the number of vendors and I've only barely seen a fraction of the show.
Posted by Tim at 1:34 PM No comments:

On the Interbike Show Floor 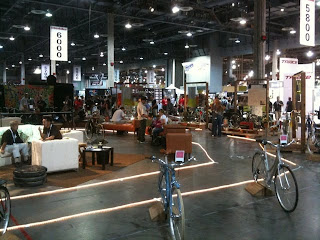 Lots of fun stuff to see. This is an "urban lounge"... Actually a very large and clever display by Globe Bicycles, who make stylish "urban bikes", a category that has been growing the last few years.
Posted by Tim at 1:31 PM No comments: 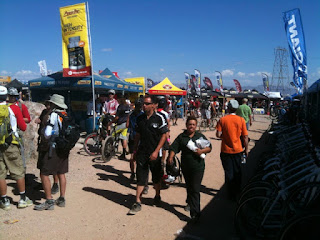 Well, it's windy, dusty and hot, but lots of folks are out here checking out the new stuff. This is a chance to get out and test ride some bikes. I've opted just to look due to the conditions, but the more hardcore MTB types are out in force.

I'd hate to be a mechanic here today. Whole lotta dust on everything.

I (Tim) am now in Las Vegas for the big annual trade show, Interbike. I only just arrived in the wee hours of Tuesday morning, after a flight delay that had me stuck at Chicago's Midway airport for a while. Not a total loss, as I found the Battle of Midway Memorial, complete with SBD dive bomber, fascinating.
Today I'll be heading out to the Outdoor Demo to check out products, then tomorrow is the start of the actual trade show in the convention center. Keep your eyes on this spot and on our Facebook page for updates and photos!

For now, just a shot of the Douglas SBD Dauntless at Midway Airport. This is the type of plane that was critical to what was probably THE decisive battle in the Pacific in WWII.

I actually never knew the airport was named for the battle, until John told me yesterday on the way to Dulles. 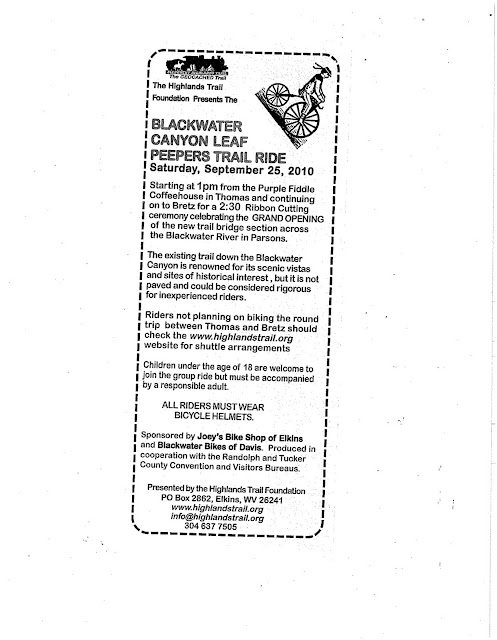 Posted by John Brunow at 6:35 AM No comments: