Please note, starting on Sunday, September 30th, we will be opening at NOON on Sundays.  So that makes our hours:

One of the reasons to go to Interbike is to find out what changes and new features bike companies are introducing in the coming year. Those of you who are familiar with the Brompton folding bicycle (or have heard my spiel about them) know that they don't make broad, sweeping changes in their bikes from year to year.  A few years ago, the biggest technical change introduced was changing the rails on the seat from solid steel rod to hollow steel tubing... a change that nobody noticed, unless they were told.

But this year, Brompton HAS introduced some new things... both changes to the bikes themselves, and new accessories for them!

So what's coming in 2013 for Brompton buyers?  First, let's address the changes to the bikes...


Probably the most obvious change will be the new brake levers, shown here. As you can see, they are now of all alloy construction, and a very different shape from the 2012 and earlier levers. The new shape is intended to improve the ergonomics of the levers, while at the same time maintaining the compact Brompton fold. Earlier lever designs had to be mounted nearly vertically, to allow for the fold, and the resulting position bothered some folks. The new levers should remedy that. In addition, the mechanism itself has a cam-action to it that should improve both power and modulation of the brakes.  Finally, doing away with the plastic lever bodies of the older models enhances the overall sense of quality of the bike.

The next most obvious change will be the new crankset (or chainset, as the Brits would say). The new unit has a number of nice features, starting with the main arms being a much more elegant and solid forged piece. In addition, the new model will have a separate chain ring, allowing you to replace just that part, rather than the entire crankset, in order to modify the gear ratios or replace a worn piece. And anyone who has ever had a Brompton chainring guard come loose or crack will be happy to know the new ones are more substantial and attach with screws, rather than being a press fit.

Not as readily noticed by the eye, another significant change is in the wheel rims... Brompton is now going to be using a "box" section rim, with a different profile, that should both be stronger and make it easier to mount and dismount tires. And if you've ever had problems with the blue rubbery rim strip on a Brompton, these rims should eliminate those issues. In addition, the rear rim will be drilled in a manner that will reduce stresses on the spokes caused by the extreme angles inherent in spoking small wheels.

Two other, less significant changes are with the handlebar grips and tires. The former will now be black instead of grey, and the M, H, and S grips are changing shape slightly to make them more comfortable. In keeping with that change, the standard Brompton tires will now be solid black, instead of black and grey, and will have the 100psi inflation pressure prominently displayed in white lettering on the sidewall.  I wish all tires would make that information as obvious as that!

One last technical change in the bikes only applies to bikes equipped with the Shimano dynamo hub. Previously, those bikes were shipped with an older style halogen headlight, but starting in 2013 they will have a B&M Lyt LED unit, which should be a fair bit brighter. As an added bonus, the LEDs won't burn out periodically the way a halogen lamp will. Given that I had made this very recommendation to Brompton earlier this year, it's great to see they are making this change.  I know others have made the same request, and it's clear that Brompton was listening.

Now, about the new accessories...

Most intriguing is the new toolkit, shown here. As you can see, it comes with the basic tools you need on the road on a Brompton... tire levers, patch kit, allen wrenches, and box end wrenches, including a 15mm for the axle nuts.  What sets this toolkit apart, however, is the manner in which it's designed to be carried.  If you look closely at the photo, you might be able to see it... the kit fits into a plastic holder that then slides into the forward section of the main frame, just ahead of the main hinge! When fully put together and installed, the "eye" of the 15mm wrench sticks out to act as a handle which you grasp to remove the unit from the frame. So if you have a flat tire or other mechanical problem, you simply stop, open the main hinge, and pull out the tool kit. Very clever.

Also clever is the new bottle mount. You can't really see what's going on in the photo, I'm sorry to say, but the mount clamps to the handlebar stem just below the bars, and is so small it doesn't interfere with the fold in any way. Looking at it, you might be wondering just what holds the bottle in place... well, it can't be seen here, but there's a rare earth magnet on the bottle mount that holds the bottle to the mount. It's a strong enough hold to keep the bottle in place until you need it, but still allows you to easily grab the bottle and take a drink while you ride.

For a company known for making few if any changes from year to year, 2013 promises some truly interesting and useful new developments.

Now, some of you may be wondering... "What about the rumors of an electric assist bike from Brompton?"  Well, while it's true that it's in the works, progress has been slower than they'd hoped, and it's unlikely we'll see such a bike until 2014 at the earliest, and it's like to be later than that. Brompton is firmly resolved to "get it right" when they enter the e-bike market, and would rather delay the introduction than offer an unsatisfactory product. So, if you have your heart set on such a bike, you'll have to be patient a while longer. We'll keep you posted if we hear anything new.  Meanwhile, watch for the 2013 Bromptons to start arriving here just before the end of the year! And come check out our 2012 stock while it lasts!
Posted by Tim at 10:25 PM No comments:

Well, this morning started off with the annual Folder Frolic, a fun ride around Vegas at 7am, followed by a parking ramp hill climb sprint... capped off with a toast on the roof of the parking garage!  A great event, and a fun opportunity to gather with fellow folder enthusiasts.  You won't see as many folding bikes ridden together in very many other places.  All manner of bikes, all manner of riders. 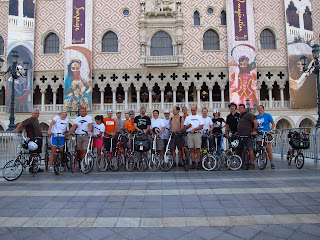 Here's a photo of the group lined up in front of the Venetian Hotel before the start.  I'm almost dead center in the black bikes@vienna shirt.  Bruce is to the left of me in the orange shirt. This was his first Frolic, and I think my third or fourth. Folks here from a bunch of dealers as well as reps for each of the major folding bike companies... Dahon, Tern, Brompton. There was even a Moulton rider in the group.  More photos will be posted on Flickr soon.
Posted by Tim at 11:59 AM No comments: 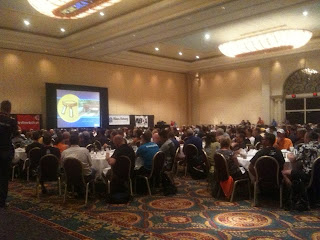 Starting off with the Industry Breakfast. Talking about the future of cycling.
Posted by Tim at 11:08 AM No comments:

Tim will be away this week, checking out the biggest bicycle trade show in the USA - Interbike!  I'll be posting info as I can, throughout the week and when I return, so watch this space and our Facebook page.

We still have a few spots left in our Basic Repair and Maintenance Class this Sunday! Learn how to fix a flat tire, as well as how to give your bike a basic gear and brake tuneup... all for less than the cost of such a tuneup!  In addition, you'll receive a small tool kit that normally sells for $25. Class meets from 6 to 8 pm on Sunday, September 9th. Learn skills now that you can use to get your bike ready for spring, and beat the usual spring rush at the shop.
Posted by Tim at 11:27 AM No comments:

Well, the kids are back in school, our summer help has gone back to college, and Fall is on the near horizon.  So as of September 9th, we will be changing our hours.  Please make a note of the new times: 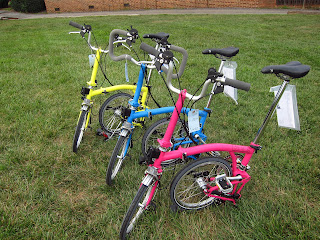 And remember, Fall is a great time to ride in the mid-Atlantic, with cooler weather and Fall colors. Now's the perfect time to buy a new bike or trike, like one of the shiny new Bromptons above!
Posted by Tim at 4:00 PM No comments: