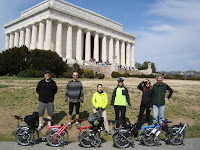 This Saturday - a Brompton Bicycle Club Meetup group ride, starting at 11am at bikes@vienna! Bring your Brompton (or buy one!) and join the fun!


The photo to the left is from the first BBC ride in March.
Posted by Tim at 9:54 PM No comments:

There are still slots open for our Basic Bicycle Maintenance and Repair class this Sunday. Topics covered include flat repair, brake and gear adjustments, basic lubrication, and performing a safety check on your bicycle. The cost of the class is $45, which includes a simple tool kit worth $16. Held in the shop work area. Bikes are not needed as there is not time for hands-on in the 2 hour class. Bruce will be teaching this class. Contact Tim at tim@bikesatvienna.com or call 703-938-8900 or stop by the store and sign up.
Posted by Bruce Wright at 8:27 PM No comments:

The Smooth Hound has arrived! 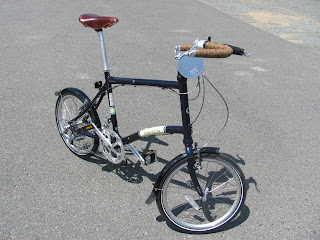 Well, in response to some inquiries from customers, and the generally favorable reaction folks had to the Soma Mini Velo, we decided to order a Dahon Smooth Hound, a bike based on the whole "mini velo" concept, but with the added feature of folding!  Dahon uses their "Lockjaw" system on this bike, which requires the use of an allen wrench to fold the bike. This results in a fold that  isn't as quick or convenient as their more typical latch systems. On the other hand, it does give you a bike that feels like it has a normal, solid frame. It's not the most compact fold out there, but it's certainly more compact than other "mini velos."

It's a nice riding bike. We all took turns giving it a spin, and everyone was impressed. And it's a fine looking bike as well, with the rather classy paint scheme, Brooks saddle and brown bar wrap on the moustache handlebars.

At the Vienna Green Expo 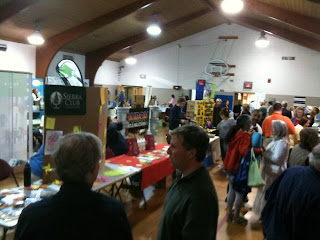 Lots of vendors, contractors, and advocacy groups gathered to extoll the virtues of going green. We are here showing folding bikes tonight.
Posted by Tim at 7:59 PM No comments:

Please note, we will be closed Easter Sunday, April 24th.
Posted by Tim at 11:51 PM No comments:

The other interesting bike... ... that came in last Saturday was this old Dunelt three speed. Back in the day these were known as "English Racers", despite the fact that they were built purely for utility. As I understand it, they became known as "racers" when the first showed up in numbers here after WWII, when the predominant US bike was the balloon tired "paperboy specials" made by companies such as Schwinn and Columbia and others. Compared to those heavy cruisers, the Raleighs and similar three speeds seemed downright exotic and racy.

What sets this one apart is the condition, which is remarkable for a bike built in 1960 (you can date an old English three speed from a stamp on the rear hub). The paint is in excellent condition, and is a color I've not seen on a three speed before. Black was the most common color of these bikes, which were mostly used in the UK for getting to and from work. It's one of the interesting facts related to these bikes that the factory workers who built them generally rode them to the factory, since cars in post-war England were pretty dear. Of particular interest to me (Tim) is that it's made by Dunelt, a relatively unknown British company that was the maker of my very first bike, which looked much like this one, but had a single speed, coaster brake hub instead of the three speed. Lots of good memories of that bike, even if it looked rather stodgy alongside my friends' Sting-Rays and Choppers.

For lots of good and interesting info on old English three speeds check out these pages at the late Sheldon Brown's site:


http://sheldonbrown.com/sturmey-archer.html
Posted by Tim at 7:32 PM No comments:

Fun bikes at the shop! Last Saturday we had a couple of folks bring bikes by the shop that I thought were both fun, in different ways.  One was the Soma Mini Velo, a small wheel, non-folding, "compact" bike of a style I hear is very popular in Japan and elsewhere. If you do a Google search for "mini velo" you'll find a number of variations on the theme. It's similar in concept to the Dahon Smooth Hound, but the Smooth Hound folds in half. The general idea behind the "mini" craze is that it's smaller and more compact than a conventional bike, and are easier to store and easier to transport or bring on trains and such, yet it rides very much like a "normal" bike. For me, I'd want to go the extra step and have it fold, but I guess some folks aren't sold on folders yet.  It's caused me to think seriously about getting in a Smooth Hound though.  Any thoughts?
Posted by Tim at 6:12 PM 5 comments:

Latest Vienna Patch Column is up!

Hey folks! As some of you may know, I write a bi-weekly column for the Vienna Patch online newletter.  The latest installment is on getting your bike ready for spring. You can check it out here:

http://vienna.patch.com/articles/tips-for-spring-tuneups
Posted by Tim at 12:18 PM No comments: