The Brompton folks require us to keep a demonstrator bike in the store at all times, so anyone who is interested can see and ride a Brompton. This year, when given the opportunity to order a new demo bike, I decided to bring in a bike that I consider pretty special... it's a S2LX, in Raw Lacquer.


S = the straight, flat handlebars, which put the rider in a more aggressive, aerodynamic position than the other Brompton bars. As a bonus, they are the lightest of the three choices.

2 = two speed drivetrain. The rear hub has two sprockets on it, and there's a simple derailleur mechanism that moves the chain from one to the other. (The same mechanism is used on the six speed Bromptons, coupled with a 3 speed internally geared hub.)

L = Fenders only, no rack X = "Superlight" upgrade. This means the front fork and rear frame are made from titanium instead of steel, along with the fender stays and folding pedal bolt, the seat post and headset are aluminum alloy, and the front wheel is lighter as well.

The resulting bike ends up around 21 pounds, a weight savings that is quite noticeable while carrying the bike, not as much while riding. To cap it all off, I ordered the Raw Lacquer, a clear finish that shows off the construction details of the Brompton frame. You can see how each joint is brazed together, largely by hand. It's a really nice touch. So what does a Brompton like this cost? Well, I'm not allowed to sell the demo bike until it's replaced by another one, but I can order one just like it for you for $2120. The same bike, in one or two of the "stock" colors (black, white, turkish green, hot pink), without the "Superlight" bits, would cost $1280, weigh a little over 2 pounds more, and not look as eye-catching. But it would still be a great bike!
Posted by Tim at 4:44 PM 3 comments:

For those of you that don't know, I'm now writing a column every couple of weeks for Vienna Patch, an online publication with a local focus. My latest piece appears here:

Let me know what you think, and please add your comments on the site.

We don't often post links to other people's blogs, but this one caught my eye, because I have been riding studded tires in winter for about 5 years now. The writer, a local recumbent rider (anyone we know?) shares his experiences with using studs on a recumbent bike here in the DC area. Check it out: 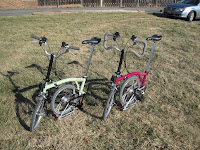 Yesterday I unpacked and prepared four new Bromptons, the first of the 2011 bikes we've received. Two are waiting to be picked up by their future owners, but these two are here for you to come see and test ride! The bike on the left is an M6R, in the new Sage Green color, and the bike on the right is a P6R, in the new Claret color. Both are really great colors, I think. There's one more new color for 2011, Hot Pink, but I opted to order these two at this time.
Posted by Tim at 1:41 PM No comments:

Following up on my earlier post, I'd like to show an example or two of the kinds of "project bikes" I was referring to.

As a starting point, for those that want to dig back into the past, you can check some of the blog posts from my personal blog "Spokes of a Wheel" that deal with customizing your bike. You'll find information on how I've "personalized" many of my own bikes and other folks' bikes as well.

In addition, follow along as I work with my girlfriend to put together a hopefully wonderful new bike for her. She has a great older Bridgestone mixte-framed bike and a Brompton folding bike, each of which are just fine as they are. Now I want to create for her the closest thing to a custom bike I can, short of building her a frame from scratch (which will come in time). The foundation, based on her fondness (and mine) for the mixte frame, is a Velo Orange Mixte frame, purchased from Velo Orange in Annapolis, MD. It's a classically styled, beautifully built lugged steel frame in a very pretty shade of blue. The first step has been taken... the bike has been christened "Bullseye"!

Next comes selecting the various components and accessories to build the bike up. The goal is a bike that is both fun and practical, as well as beautiful. Keep your eyes on this page and follow along as we begin.
Posted by Tim at 6:50 PM No comments: