Are you an avid lover of all things Brompton? Do you ever wonder how this marvelous little machine came to be? Wonder about the people behind it?

Well, here's your chance to learn all about one of the finest folding bikes made to date - The Brompton Bicycle, by David Henshaw, is now in its second edition, and we have it here at bikes@vienna! Priced at $24, the book is a fascinating look into the story of the Brompton, as well as a good overview of folding bikes through the years.

David Henshaw is the editor of A to B Magazine, an excellent little publication devoted to folding bikes and electric bikes. It's available in an electronic edition via Exact Editions, and is quite informative and fun to read.

A good review of the first edition is here:

And a brief followup on the second:

Our hours this weekend -

Monday and Tuesday, we will be closed as usual.

Opening again at 10am Wednesday the 28th.

Please join us for the Christmas Eve Luminaria Ride, at 7pm at the shop.
Posted by Tim at 1:32 PM No comments: 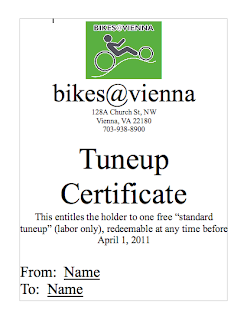 We offer general-purpose certificates, made out to any denomination, personalized for the recipient, and valid for any purchase at the store.

Now we are also offering "Tuneup Certificates", good for the LABOR charges only, for a "standard tuneup" here at bikes@vienna. A standard tuneup covers a wipe-down and inspection of the frame and wheels, adjustment of the brake and gear systems, wheel truing, and adjustment of any bearing assemblies that require adjustment. Any parts needed would be at additional cost. These certificates sell for $60, which is $20 off the normal cost of a standard tuneup. The only catch is that the bearer of the certificate must use it by April 1st, 2012. This will hopefully reduce the mad rush we typically get in April, and make it more likely the gift recipient will get their bike back quickly!

So come on in and take care of your holiday shopping today!
Posted by Tim at 1:23 PM No comments:

Now and then we get a bike in for service that has a story to it, and those are always a fun experience for both the owner and us.

Well, recently we were asked to fix up the little bike you see to the left here. It's an unusual bike in its own right, being a child's bike built with lugs, in the mixte frame style (two thin sloping top tubes). I've never laid eyes on such a bike before. It was clearly very well made, a quality bicycle, and very stylish with an elaborate, yet classy paint scheme. And look at the fenders and chain guard! The bike was made in Switzerland in the 70s, and while it arrived a bit grungy with dried out tires, you can see it cleaned up really well, and looks great.

What takes it beyond being merely "another pretty bike" is the story behind it. The fellow who brought it in to us told us his parents had bought it for him from the Jean Brun shop in Geneva, Switzerland, when he was a little boy in the 70s. He was bringing it to us to fix up so his own son could now ride it! Needless to say, we were happy and honored to be a part of the project, resurrecting a fine old bike for the next generation.

One challenge right off was the tires... a size never marketed in the US, as near as I can tell, and difficult to find even in Europe, where they were primarily used on Dutch bikes, I think. Some sleuthing on the part of the father ensued, and one day he arrived with brand new Michelins, shipped from Ireland! Then it was in Daniel's hands, and he did a marvelous job of cleaning and lubing everything, making the bike ready to ride and looking great. He even managed to revive the original bell, much to everyone's surprise.

The best part of the whole project though was when the whole family came to pick up the bike when it was finished. Mom, Dad, older sister Madeleine, and of course Avi, the young boy eagerly waiting for the bike. Even the family dog, Wolfie the toy poodle came along! Everyone was really excited and happy to take part in the "unveiling"... all of my staff as well as the family were all smiles and laughter. It was a really wonderful day. We all wish Avi many, many happy adventures with his "new" bike! You can see more photos of the bike at:  Jean Brun Bike
Posted by Tim at 4:22 PM 8 comments:

Mark your calendars! On Christmas Eve, at 7pm, we'll have our annual Holiday Luminaria Ride. For those of you who might not know, homeowners on the eastern end of town put out luminaria (lighted candles in bags) on Christmas Eve, and it's a lovely sight. We'll have snacks and beverages afterwards, so come join in the fun!
Posted by Tim at 3:29 PM No comments:

Well, our first Tern folding bicycles are in! We've gotten the first few unboxed and assembled, and given them test rides. The consensus around the shop is that they are winners! Very nice bikes... sharp looking, well built, and fun to ride. First to arrive are the Link D8 ($600) and the Link D7i ($800). Come check them out!